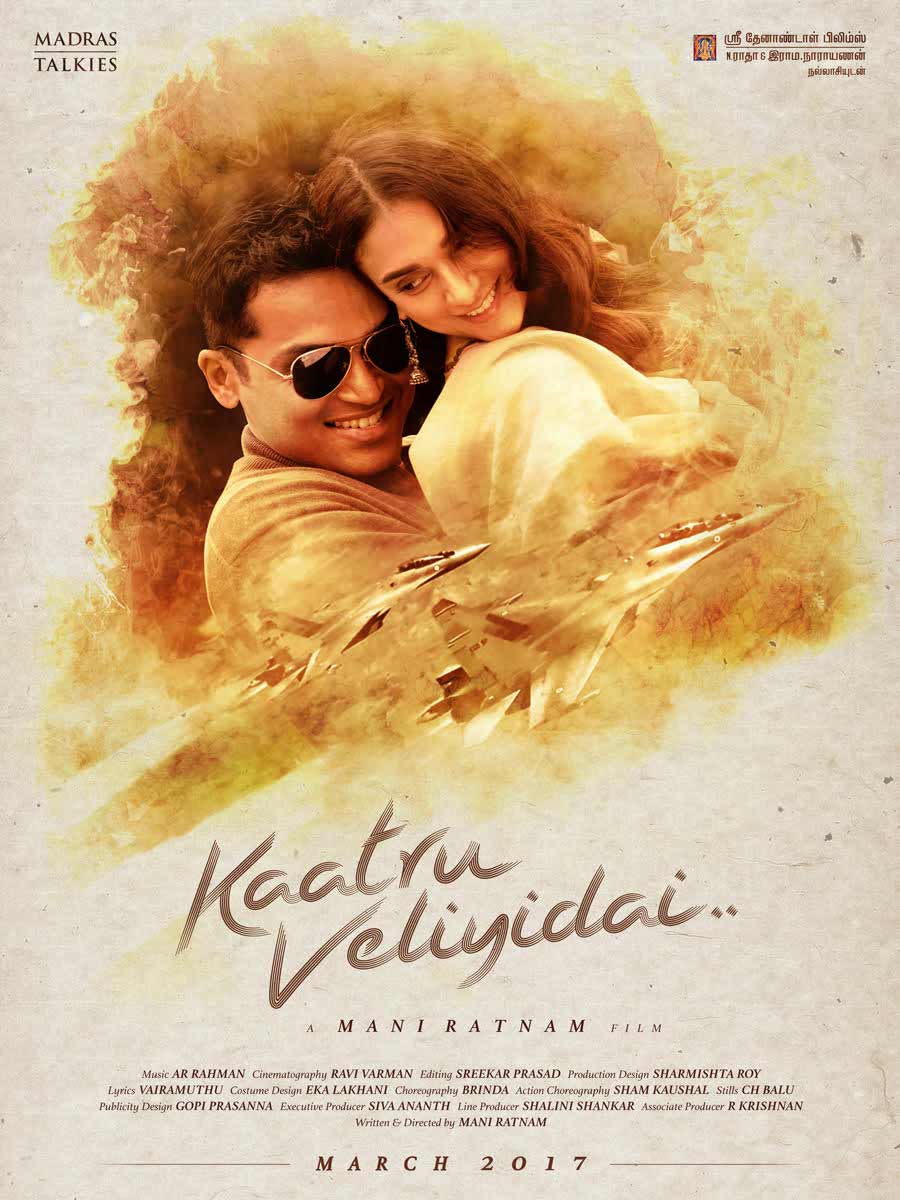 Vidit Bhargava
Kaatru Velliyidai by Mani Ratnam marks 25 years of his collaboration with A.R. Rahman (my favourite music composer, and also the reason why I end up watching random Tamil movies even though I have no knowledge of the Tamil language at all), and in many ways it is also a near perfect expression of what Mani Ratnam and his fairly consistent team offer best: great music, stunning visuals, innovative angles, interesting metaphors and a fresh perspective. However, movies aren't just about stunning visuals and great music, and Kaatru Velliyidai is far from Mani Ratnam's best.

Set in the 1990s' Kashmir, Kaatru Velliyidai is more of a character sketch of on an INA pilot (played by Karthi) and a young doctor (played by Aditi Rao Hydari). There's depth to the two characters and there's a decent story that's told here. But where Kaatru Velliyidai really excels is the visuals. From the Himalayan expanse that makes up for the landscape of more than half of the movie, to the some really well directed scenes which are beautifully captured. If the story is just a tad bit slow, it's complemented by visuals that brighten your day. Ravi Varman's visuals accompanied by Mani Ratnam's direction manage to capture the beauty of the Kashmir Valley.

The setting is well laid out, the Honda Kinetic, the Willies Jeep, the Delhi house with a central courtyard (which I'm sure is the same house that Mani Ratnam used for the residence of Preeti Zinta's character in Dil Se), the VHS tapes and the CRT TVs all subtly remind you that it's the 90s that the movie is set in. It's always great to see attention to detail in a mainstream movie. It also helps a lot that some of the best work of the director came in that very era.

Kaatru Velliyidai also benefits from stellar performances by Aditi Rao Hydari and Karthi. Aditi Rao Hydari is effortless in her role. Karthi even though a little loud at times, shows prowess in the later parts of the movie where he's playing a more subdued role. The support cast for most of the part doesn't really shine though. They are all good performances but there's little that stands out. However, that only works in Kaatru Velliyidai's favor, as the focus is kept on the two lead actors.

There's a lot of implicitness in the screenplay. Which is pretty interesting. The first time Leela (Aditi Rao Hydari's character) mentions about her brother, it's only a passing reference made to VC's (Karthi) senior. It's not until a good 15 minutes later that it was her brother she's talking about. The reasons for why the characters behave in the way they do, all lie in the implicit hints dropped around. At one point, the movie shows a glimpse of VC's family, which when you think of it also gives you an insight as to why VC's character is so flawed and reckless. However, this implicit nature also makes the movie look incomplete. There's so much to be filled in the gaps, that it's a little discerning and frankly not the ideal experience.

The entire implicitness of the screenplay and the fact that the story gets a little stretched and even a little outlandish towards the end makes you wonder if this is an incomplete movie. There must be more of it, surely the director's leaving a lot for the audience to interpret. While the last hour is not disastrous, it's nothing special either. The screenplay leaves a lot to be desired.

A.R. Rahman's music is top notch. The combination of Vairamuthu, Rahman and Mani Ratnam produces some really meaningful and melodious tracks. Amongst the songs, Nalai Allai, Saratu Vandiyile and Azhagiye are my favourite. Tango Kelaayo is innovative, Hariharan dubbing both the male and female voice. But in general, I've been listening to the entire soundtrack for the last 4-5 months and it feels like another winner from the trio.

Ultimately Kaatru Velliyidai is a visual treat with an interesting story, bogged down by an ordinary screenplay. Great music, visuals and acting lead it quite far, but not far enough. I'd only recommend it for the visuals And music. If you are looking for a good story and screenplay to go along with it, this is not the Mani Ratnam movie you're looking for.

Posted by virtuoso Vidit at 12:48 AM No comments: