The movie is a good movie by Pryadarshan, good cinematography and playback, comedy, horror and nicely put songs. All these things together haven't been seen before! but this time yes we see all these together in Bhool Bhulayaa which was supposed to be a comedy movie according to the trailers but it's a comedy+ physcological thriller. The first time I saw a sycological thriller! and it is really a film where the suspense is mentioned till the end. We had seen some films of Vidya Balan where she had done an average job but this time she has done a gr8 work, Akshay Kumar adds Light to the Dark movie, Shiney Ahuja also does gud but Rajpal Yadav could be better.

The story starts in an haunted Castle where Paresh Rawal is preparing the castle for the next owner of the castle i.e Siddharth 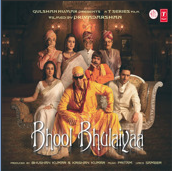 (Shiney Ahuja) He is the grand son of the king who studies in USA, and his uncle stay in a house near the castle. He arrives the next day with his wife AVNI (Vidya Balan) who is keen to know about the facts in the castle. They try to convence their uncle to stay there and they finally go in the haunted castle. There Avni while taking a round in the castle finds the haunted room.................. now she goes in with a friend of her and she sees the haunted room on the 3rd floor locked with some casted spells, She asks her friend to get the key her friend gets a duplicate of that and Avni opens that room she sees the photos of Siddharth's grand grand father the king of this castle next she finds a room inside that castle and sees the photos of the ghost she sees the ornaments she wore and goes back in the castle haul there she finds Siddharth's Friend Radha (Amisha Patel) who warns her about the room but Avni doesn't listen to her. In the great haul she sees that her friends parents are beetting her because she gave the key, After some time Misterious things start happening and Siddharth is forced to blaim his friend Radha then he approaches his friend and a sycaterist Dr. Aditya Srivastav( Akshay Kumar). He comes and sees the mysterious happenings around castle he comes to a conclusion that its a person at work. Next he listens a voice of a bengali singer who is probably dancing. He goes to the mysterious room and listens something thats feering he listens that the ghost is goin to kill Siddharth. Now he tries to find out whose doin that for that he finds a family member the brother of Radha who is now locked in a room as she was the most suspicious person. The go to Malkapur a village in central India. There in the castle the family members call a saint who comes to be the friend of Aditya. But till now Aditya, Siddharth and Sharad (A poet in the film) know about the truth and this is told to the saint also. All of them decide to keep quite and not tell any one.............................

So, on the whole the story is gud.
Bhool Bhulayaa is such film that you can watch it ones and even enjoybut ones you know the suspense its not worth watching.

I will give : 4 stars to the movie
Posted by virtuoso Vidit at 8:38 PM No comments:

I found a gr8 software this evening this one converts any thing 2 iPods gud one !
Posted by virtuoso Vidit at 8:32 PM No comments: