It's hard to review a movie, when you know that the makers aren't done with the story when the end credits start rolling. They are of course, only setting things up for an epic conclusion. How do you, then, sift through what has been kept under-wraps and what has been left hanging to your imagination? Bahubali: The beginning is only one part of a two part tale.

The story here is pretty much a template plot for brewing up a revenge saga. Bahubali: The Beginning is about the history of the kingdom of Mahishmati, where two cousins compete for the throne. Both equally skilled, powerful and clever. It's hard to declare one the king, without doing injustice to the other. But amongst the two cousins, one is good (Bahubali) and the other evil (Bhalaldev), while one cares about the kingdom the other only cares about destroying the enemy. In present day, the good prince (Bahubali) has been killed, with the evil one at the throne, torturing his kingdom into submission. Bahubali's son is our central character. Smuggled out of Mahishmati as a baby and raised by the village tribals, He is completely unaware of his royal lineage and finds himself in a situation where he must know who he really is.

If Bahubali's Central plot is simple, the treatment it gets is anything but that. Slick Computer Generated Imagery and a grand landscape setup form what is, one of the most engaging movie watching experiences I've had in the recent times. S.S. Rajamouli's imagination is top notch. He carefully blends reality with lumps of comic-book Superhero flair. He's well accompanied by the amazing CGI which is carefully used an seamlessly blends into the real world. In one of the early scenes in the movie, our protagonist climbs a stunning waterfall with the help of a kedge sent from a bow and anchored to a tree at the top of the cliff. The scene was perhaps the highest point in Bahubali's GGI, it was so convincing, that to anyone not aware of the fact that the movie is using extensive CGI it would have seemed like a real stunt on a waterfall that big.

The second half of Bahubali, much faster and engaging, is filled with epic war visuals and expansive landscapes. The war visuals are well executed. The thirty minute war has a nail biting finish. But what truly works for the war though, are the visuals, the carefully planned defense strategy, the reckless massacre of the enemy's army and the frankly too high-tech a weapon for its time, all get the extra sheen on brilliance due to the graphics.

Amongst actors, Prabhas, in a double role, as Bahubali and his son Shivudu is pretty impressive. Rana Duggabati does his menacing act nicely but it's Sathyaraj, as the able warrior Katappa who steels the show here, watch him in that scene where he dismisses an Arab Sheikh's greatest sword, calling it too slow for his skill, you'd never imagine such swiftness coming out of the character.

Bahubali : The Beginning can best be described as a visual storytelling experience. You are not watching it for an extremely complex or perplexing screenplay, you don't care what language the movie is playing in or that it's dubbed in another (in fact you wouldn't even notice the dubbing Sync issues because of everything else that's going on in the movie). With Bahubali, just like with Avatar and Intersteller you are sitting to experience a story and S.S. Rajamouli deftly tells you a simple tale set in a stunning landscape, in a way that's highly engaging. And they leave the first part at such a cliffhanger that I just can't wait for the conclusion.

Posted by virtuoso Vidit at 4:01 PM No comments:

Vidit Bhargava Hidden inside the wonderful world of InsideOut is a tribute to the Reality Distortion Field, often associated with Steve Jobs; A comment on how careless people are about 'facts', and a reference to the booming startup scenario in the Silicon Valley and having to cope up with moving to a completely new city. InsideOut's details are sharp and the plot boiled down to the simplest possible form.

When Reilley's parents decide to move from Minnesota to San Francisco, her world's about to change, both Inside and Outside. Inside the 11 year old's brain reside Five Basic Emotions, Joy, Sadness, Disgust, Fear and Anger, taking turns to control Reilley's Actions and collectively controlling the generally peaceful headquarters of the brain. But things go awry when Sadness, the often neglected emotion, begins to tinker with the core memories.

The most interesting part of InsideOut is the brain. Pixar constructs a simple world full of wonderful things which Joy and Sadness end up exploring. There's a brain headquarters which control Reilley's actions, her actions define her memories which land up in the brain as shiny little balls and while most of them end up in ‘Long Term’ Memory, a library of sorts which contains a lot of memories stacked together in giant shelves and maintained by the ‘brain cleaners’, some memories form the core memories of Reilley. Which in turn define her behavioral ‘islands’ like Honesty, Family Values, Goofiness. Then there are tiny little ‘adventure parks’ too, like Imagination Land where Reilley's imaginary friends reside or the Dream Creation Place where dreams are projected. There's also a 2D world, where you end up as Picasso like objects (The favorite part of my film was to see the transition from 3D to 2D to just shapes). InsideOut throws In words like Core Memories, Long Term Memory, which would otherwise be suited more to a computer class Than an animated children's movie but these explained so simply that it's hard to think that anyone would have a hard time understanding them. InsideOut is a ride you'll love to take and the director spends time in letting you discover the details.

The Brain has been very systematically made. It's not simple by any means but the complexities have been presented in such a way that you want to visit the carefully structured world. It's beautifully designed and well constructed. This has been a long standing strength of Pixar. From the carefully crafted world of Toys in ToyStory to the fine world of Fiats, Volkswagens and Racing cars in the Cars (Highly Underrated), they create worlds that you'll just love to visit again. InsideOut is no different.

InsideOut poses another interesting question though, fundamental to the movie's plot: Do joy and sadness in everyone's brains go through the same ride that Reilley's emotions went through? Do they comeback or do some stay back in long term memory for very long? It's when you start to ponder on the uncanny partnership of Joy and Sadness, that you realize how their sync is highly important. InsideOut associates these events with growing up, Reilley moving to her teenage years. It is a very interesting indeed. 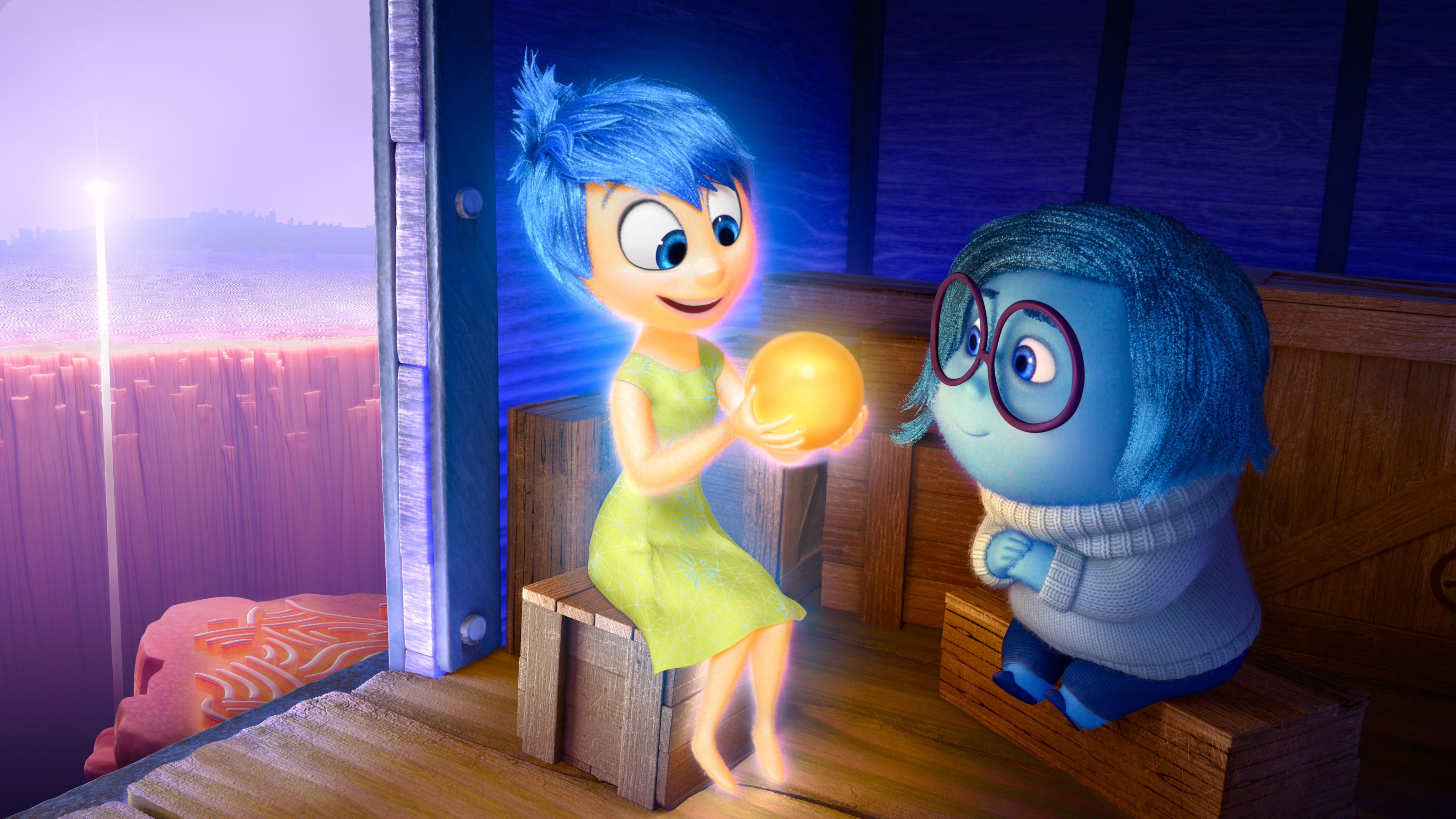 In the nearly pitch perfect world of InsideOut what sticks out though is the slightly jagged speed with which the screenplay moves in the second half, and even more so when the focus shifts from the characters to the beautifully created background, it's beautiful but it's best in background, but then again it's a kids story and they won't mind a peak into an extremely creative brain.

I saw this movie about ten days ago and the characters have stuck with me, the idea of tiny little creatures controlling a person's is extremely interesting. Few movies have this kind of impact, and coming from a an animated movie, is only an indication of how far the medium has gone into making extremely special movies. 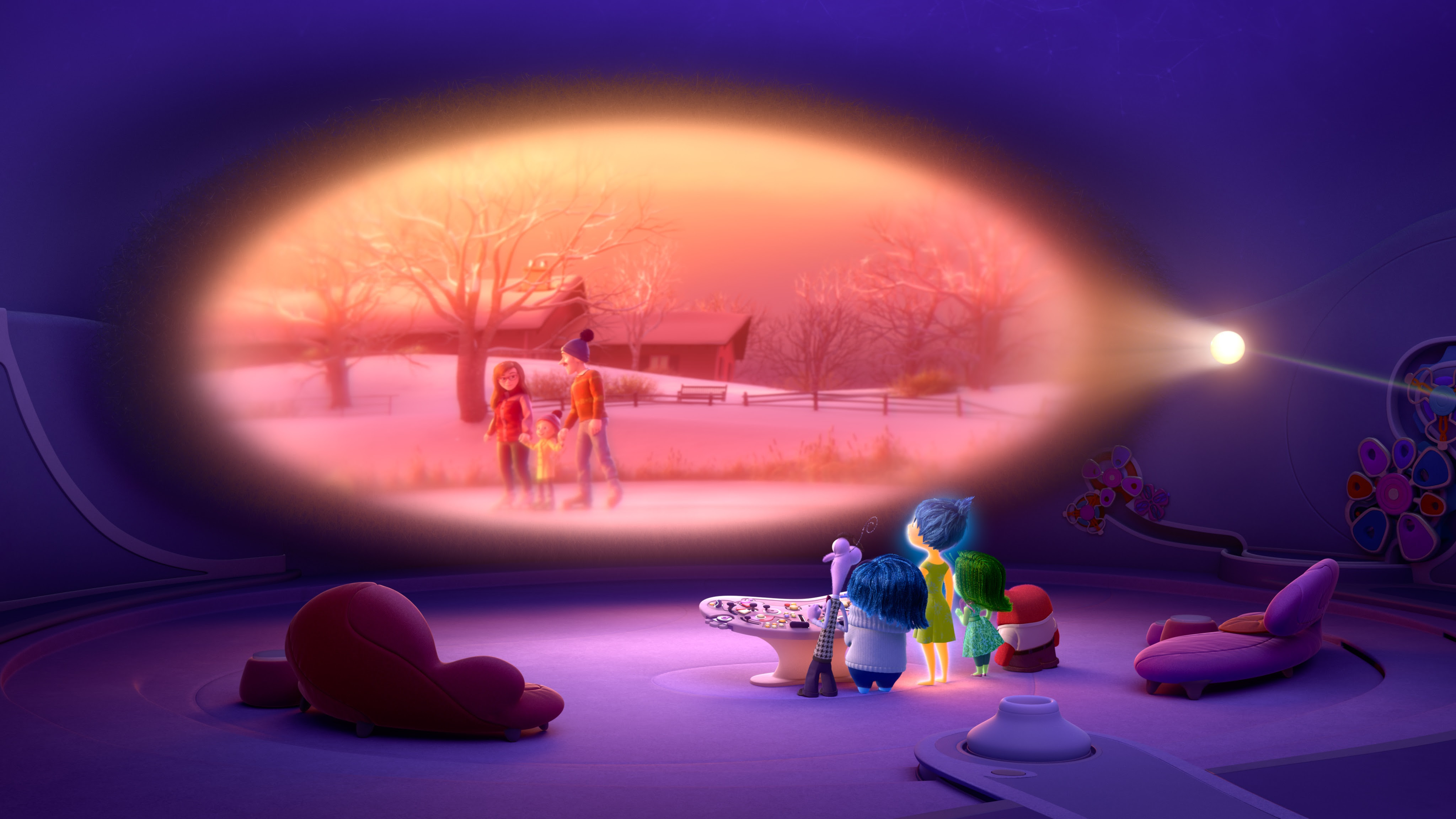 Pixar's InsideOut is the best movie I've seen this year. It's easily one of the best animated movies ever made. It's a movie that just can't be missed.

P.S. A note to theatre owners and Disney India

Its one thing to offer viewers the relatively new experience of 3D, it's another to ram that stinking pile of garbage (3D, Ofcourse) down our throats. I wish theatre owners and Disney India in particular understood that no one gives a damn about watching a movie in Three Dimensions with the help of an extremely unhygienic pair of glasses.

Posted by virtuoso Vidit at 1:21 AM No comments: