Vidit Bhargava
This morning, the makers of the award winning movie "Masaan", took to the Social Media to bash Hotstar for censoring of their movie for the internet. Hotstar seems to have retorted back saying that they put what the producers give them.

In reality, neither Hotstar (they are, but they didn't do anything that they should be targeted negatively for), nor Drishyam Films is at fault here. Hotstar, is a media streaming service by Star that aims to be a chord - cutting solution for television viewers. What Hotstar does is, they use the television cuts of the movies they upload. Take a careful, look at the CBFC certificate on the movie. It's for the movies made available for viewing on Television channels. 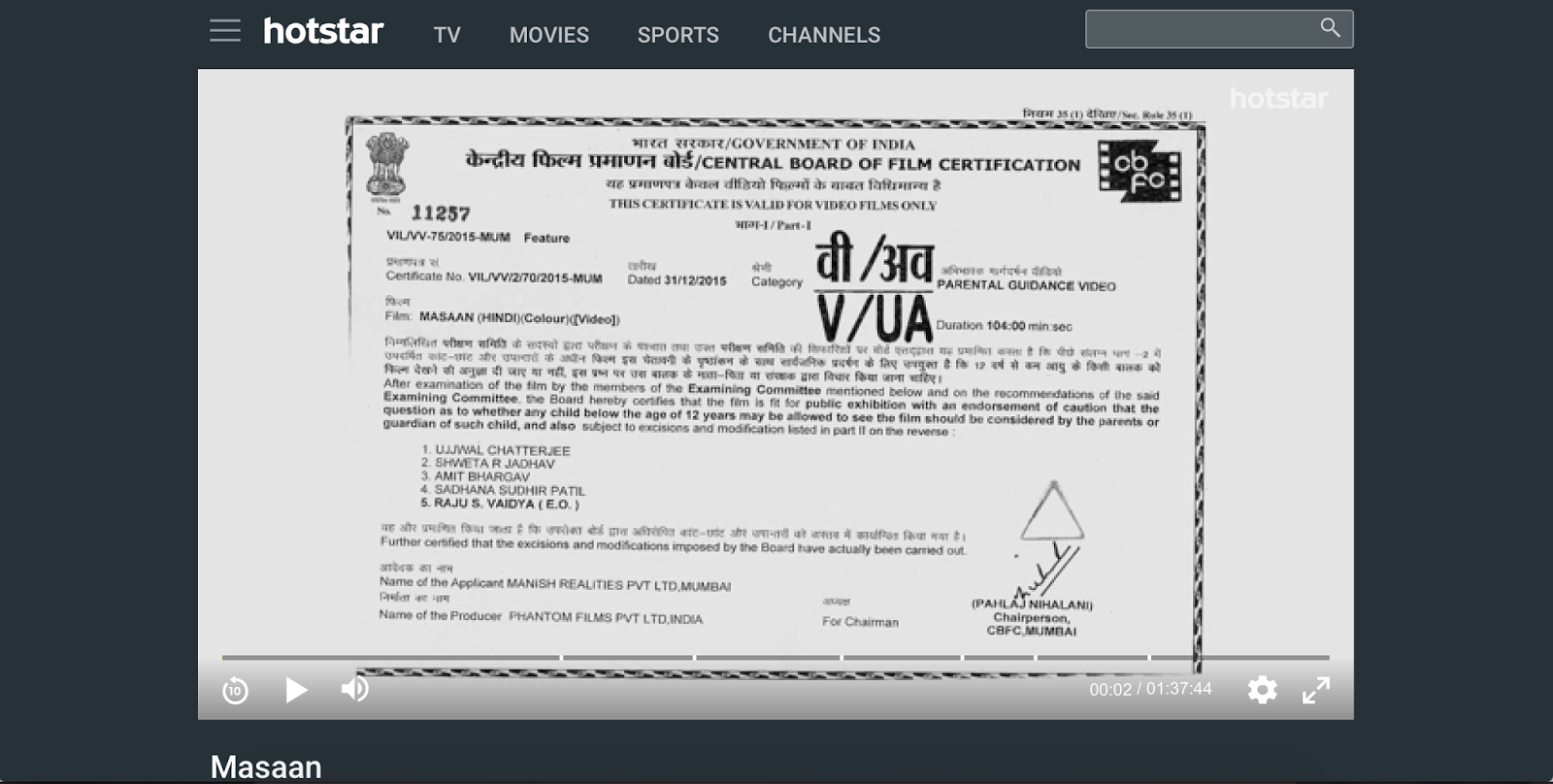 To be honest, this is just Hotstar being lazy about getting the rights to show the Theatre cut. Such Parental Guidance doesn't make sense for online viewing as these On-Demand Services.

Personal Take on the Hotstar service: They had a good idea. But their content lacks basic options like Subtitles or Closed Captioning. Making it a painful experience to watch movies as it is. Top that with the TV censorship in place and you'd want nothing to do with this thing.

--
PS : In a sharp contrast to what Hotstar is doing, their competitor Netflix, doesn't even put up a CBFC Certificate before the movie, let alone using a Television Cut for it :)
Posted by virtuoso Vidit at 1:21 AM No comments:

Security and Some Changes

Vidit Bhargava
A few hours ago, this blog experienced something peculiar. Google Chrome had started to list it as a security threat. Suspected for possible phishing attacks, from a particular website that seems to have been referenced somewhere on my blog.

Here's what the problem was : I help my blogposts with images. Some of them are linked to third party websites. I've been practising this for about a decade now, without facing any serious security issues. I don't like to save them and then upload it because I feel it's somewhat immoral as it then removes the credit from the people who originally obtained it. But a recent blogpost of mine linked one of those images to a website with dubious credentials, and this started a chain of action that resulted in my website being blocked by Google's security systems that help chrome keep phishing websites at bay,

This is had never happened before and this will never happen again. I've taken a few steps to stop and prevent such security issues from happening.
To start with, The blog has been updated with SSL encryption.
The link in question has been removed And
There will be no further blogposts with images other than the ones I clicked / once from trusted sources like wikimedia commons.

The brighter side to this is, that it only seems to be a suspicious link that triggered this. To the best of my knowledge, the website wasn't able to operate any phishing scam through this blog. But it's a lesson well learnt for me.
Posted by virtuoso Vidit at 12:28 AM No comments: