Vidit Bhargava
How many of you own a cloud? Well, as far as I know, many of you own a cloud or two, without even knowing about it! Cloud Computing is the buzz-word these days. Everyone wants to jump into the cloud business. The People are also willing to put their documents on the cloud, rather than carrying them in a pen-drive or a CD. Well Naturally People also want their Music Collection to go everywhere with them and not with an extra-burden of carrying a CD Case or an external hard-disk everywhere. Music Lockers they are called. And Currently two large companies are giving them this facility for free.:

The Option to Buy the tracks and store directly to the cloud drive, eliminates the computer hard-disk in the process of listening the music. This is a really good thing because it saves the user from the hassle of downloading a song and uploading it back again.
Connectivity: The cloudplayer can be opened from any Web Enabled Device. You just need a good browser and a decent screen size to peacefully play tracks. However you'll find a dedicated application for Android Mobiles (Only in US) also.

2. Google Music Beta
Google Music Beta was announced at the Google I/O held this month. While Google's Music is very much 'similar' to Amazon's cloudPlayer it is not exactly the same. Google Music provides the users with an online storage for their songs, A Dedicated application for the management and uploading of music, An Android App and a Website that allows you to listen music anywhere. Also Google Music has a feature to work offline on all devices, so if you are out of internet coverage it can play the recently played tracks.
While Amazon does provide users with an option to download the music straight from an online MP3 store. Google has no such option. So basically what you'll have to do is this: Download a song from the internet and then put it back up. And that is a tiresome job.
Connectivity: Google Music is currently in Beta Stages and available by invitation only and the service is only for the US Residents while it is still in the beta stages. As far as Mobile Devices are concerned, Android users are getting an app and others can use the website to play music, which innocently touts a flash interface, blocking the iOS Users from using it. 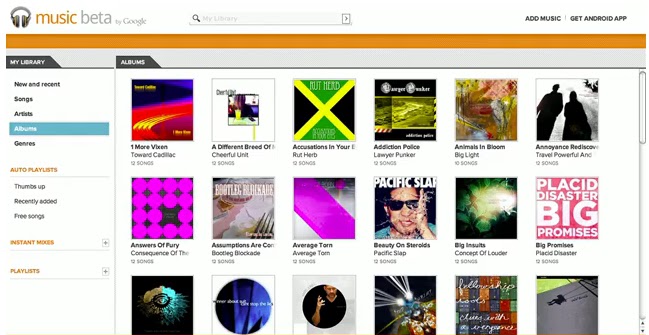 We just saw two different cloud music lockers. Both of them work on your input. You need to download a song first, and then you need to upload it to the cloud again, just for the sake of using it everywhere. And you are doing this for every song you download, and if this service at all gets popular, the same process will be done by millions of people making millions of duplicates of a single song on the internet, contributing to a lot of Digital Garbage. This is different when you use your iDisks and Dropboxes to put files on the internet, those are unique files you won't find elsewhere. And it is wise to store it on a single location rather than making multiple-copies of the same file on every computer.
Let the Music be on one Single Cloud And let users take the music from there. This way, more and more people can listen to music through one source. Also The Music Locker should directly be connected to the Music Application we currently have on our computers, and Mobile Devices. And if possible we can make it available to everyone in the world and not just the United States (Where every cloudplayer seems confined today).
Wrap Up: Currently Cloud Music is Very Amateurishly implemented. Companies want a lot of input from their users, who are unwilling to take the pains. Cloud-Services need to be tackled differently for every different utility. While the current approach may be good for Text and Picture content, it is naive to think it will be the same for Music and Movies. However, if you are too despirate to use Cloud Music Players, I'd suggest the Amazon Cloud Player, which requires the least effort from your side.
Posted by virtuoso Vidit at 3:39 PM 1 comment:

Shor In the City Review 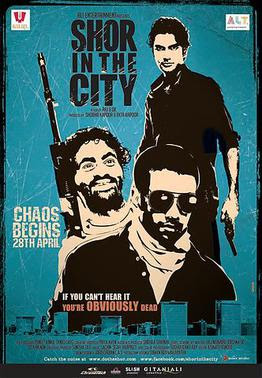 Vidit Bhargava
I've almost forgotten how to write movie reviews, the last one was month's back! So I watched Shor In the City sometime back, and here is my take on the movie
The Movie Starts with Noise, A lot Of Noise, Too-Much Noise, and an aptly fitted music track for the high-decibels produced in the first seconds of the film. The Movie is set amidst the Ganpati Festival and revolves around the lives, of a few people. (Every movie does that? Ain't It?). Among these few people you can find an amateurish cricketer, who aspires to be selected in the State team. An NRI who is starting a small-business and A bunch of small-time crooks, doing nothing, yet being the most interesting of the lot. All three of them have ample of reasons to be bad enough to make a dark comedy.

Let's start with the NRI lad, Abhay, played by Sendhil Ramamurthy (whom you most famously have seen in the NBC Science Fiction Series, Heroes, and most non-famously seen in The Wonderful Afterlife, by Gurinder Chadda). Abhay wants to set a "Small Business" and Mysteriously enough we never come to know what that "Small Business" was about. So, the NRI Guy, has a lovely [just being sarcastic] encounter with the city Ransomers. What they want is the regular hafta, which the NRI cannot possibly understand, he approaches the police and things get wild, The Ransomers, show their true colors. Now, Abhay must do-something to save the day.

Sendhil Ramamurthy does a good job here, he plays the perfect NRI, and is well fit in the character of Abhay. Preeti Desai has a small-role too. But that is mainly to be his girlfriend. She has practically no influence in the story.
--
Jumping to another one, The Cricketer chap. Young Cricketer Sawan (played by Sundeep Kishan) who is quite disastrous at his work. Doesn't bat well at all! (Or is it just the pressure?). What can he do? He can bribe the selectors. But for that he needs money. Here comes the interesting part, this boy tries practically everything to get money, all equally funny! Education Loan, Getting into the Dharna Business, and other Ideas for which watching the movie is a must.
Sundeep Kishan as Sawan does a fair job in his first Hindi Movie. Good Acting, but Sundeep's story is loosely written and does not probably share an equal screen-space, for which the director tries to fix things in the climax.

Coming to the Shor's Shor. The Three Crooks, Tilak, played by Tushar Kapoor, is a Pirated Book Publisher, Ramesh (Nikhil Dwivedi) and Mandook (The Legendary Pitobash Tripathy) are his friends. Now these people, are fun. They steal a prominent writer's script to publish it first and sell on streets! They pick-up a bag from the local-train, full of Arms and Ammunation and a bomb! (AK-47 hai ya 56? The point is they don't know themselves!), and try to blast it, on the outskirts of the city! And they keep on doing such amazingly fun work that you are chained to your seats as you are force-fed with a perfect dose of Laughter and a Black Plot.
The Best Actor of the three is Pitobash. He is witty, fun to watch on the screen, and has a screen-presence like no other. Tushar Kapoor's acting is good for a change, his obsession with the Alchemist, or Pitobash's witty humor and love for his AK-47 (or 56?), or Ramesh's instrumental role without which the trio-wouldn't have had the effect. Everything is well placed and witty. Its neither too little nor too much. Just in the right proportions.

Amongst the others, Amit Mistry and Zakir Hussain have acted really well, and the actresses have done their job too. One is not left with any complaints on the acting front.
The question that lurks in everyone's mind is,"Is this a good "Black" Comedy? Is it Black Enough? Most Black Comedies fail to be good movies, just because they have too much of slapstick humor and fail to have a shade dark enough. Krishna DK showed his skills with a Black Comedy in 2009, it was called 99. He strikes again with Shor In the City. The movie knows when to be serious and thrilling and when to push the audience into unstoppable laughter. Shor in The City couldn't be a better example for Indian Black Comedies. (of course Pushpak is still rated the best, but Shor is really very good stuff).
The New Trend in Films these days is trying to connect, utterly unconnected life-forms in to one plot. This is just like solving a quiz connect. You've got to make a connection out of nothing. and you either get it right, or are completely lost. We have seen many attempts at these interconnected stories, some of the notable ones being Dobhi Ghat, Valentine's Day, Life in a Metro, New York, I love you and many more which were probably failed attempts. It is really hard to make these type of movies. You need to focus clearly on all the sub-scripts and balance between n-different scripts, and some how make it look like it is one movie you are watching, by the end. This gets although more difficult with Hindi Films, given the reputation they have with handling a single story let alone three or four stories together. Well! Shor In the City is certainly one the better attempts at this. It does everything almost perfectly. And is quite successful at the Herculean Task these kind of movies need to perform.
Summing it up, : Watch Shor in the City if you haven't already. This should not be left at any cost!
Rating: ****
Posted by virtuoso Vidit at 2:01 PM No comments: