Vidit Bhargava
Product : MacBook Pro 13"
Manufacturer : Apple Inc.
I am quite aware of the fact that as soon as I bought the macbook pro 13", it got updated. Quite Sad! However, I still write this review. Why? Eh Bien, Apple has merely updated the RAM, Hard - disk space and Graphics of the new MacBook Pro. There is no change in exterior, looks and processor. Everything else remains the same. And my review guides you about the new MacBook Pros also. Don't Worry!
To Begin with lets start with the most important of the lot: Hardware Specifications

You can see the specifications given in these products are far lower than the standard specification that comes with any Dell or HP laptop. Well, those run Windows and this is a MAC. The Specifications of the Old MacBook Pro which I am using for three months is less, however when I use it, it doesn't make me feel so. I mean, even on Running heavy softwares on the MAC OS X, it didn't hang. In fact, even with this specification I have never faced a hang issue. And that is quite an achievement.
So on paper the MacBook Pro may be weak on Specifications but when you use it, its more powerful than any Dell or HP laptop in this range. It is simply the difference of the OS.
NEW : The new MacBook Pro 13" has a 4GB RAM, 250 GB Solid State Drive, 10 Hours Battery life and better graphics. The RAM adds to the speed, however the 2GB RAM wasn't slow at all. 250 GB was a necessity, at this stage when MAC's use is in Professional industry, 160 GB is too less. About the Battery life and Graphics I'll talk later.

Exteriors:
Starting with the outside shell. It's Uni-Body Aluminium and its great. It demonstrates the sheer class of design Apple has. There is nothing over the top but its simple. Simple enough to look stunning. The shell is very thin and the weight of is quite appropriate for ultimate Portability.
Now lets come to the technical aspects : First the ports
The Ports given are decent. There are 2 USB ports with a FireWire 800 and Ethernet Port. The SD Card Slot is also there. And at the end sitting nicely is the MagSafe Adaptor which is revolution itself. There is also a mini - Display Port.

MacBook sacrifices The HDMI port for Slim Looks. You gotta buy the mini-display to HDMI dongle for that. That is quite bad.
Second: Keyboard and Track Pad
Here too you can see class. The Black Backlit Keyboard is a delight to write on. I've written many of my long blog posts on the same, with no pain. The Back Light is helpful but its only a neat addition. I personally don't use it much. The feel is 10 on 10, though.
Talking of the Track Pad, its really helpful for those brilliant multi-touch gestures which you need 'time' to learn if you haven't used the iPhone. The lack of Buttons for left and right click is another genius work. Which more and more laptops are adapting now.
Third : The Screen
The iPhone has the retina Display, the iPad has the IPS panel, all very bright. All Bezel Bound. MacBook Pro is no exception. Except the Fact that the bezel looks stunning here (unlike the iPad). The screen bright enough, Has a maximum resolution of 1280 x 800 pixels. It is again awesome!
Above the screen sits, neatly fixed in the center: The iSight Camera. Which can record in-depth 480p videos (though it is at an awkward position to record them) and VGA photos. One of the best web Cams I've Seen.
***
Summing it up, Everything is nice and classy in Terms of design and yet there are no fancy colorful backs. However, a problem that you can face with the sharp design is that the design is quite literally sharp, The sharp edge at MacBook's latch can cause a little problem. It is actually very sharp.
Battery Life:
The battery life is stunning. The MacBook Pro promised 7 Hours and I get it every time. The new promises 10 Hours and reports suggest its accurately given.
The MagSafe adaptor is one of the best parts, even if I trip on the charger, (which i usually do) the MacBook is left untouched. Its brilliant.
Software:
The MacBook has the MAC OS X 10.6 Snow Leopard pre-installed. Which is arguably the best most secure operating system to date. Also as I mentioned above, it actually uses a lot less memory and hangs very little. And I can go on and on praising the legendary OS range...
Also you get iLife 2009 - which is again filled with a basic set of software. For amateur development.
Sound Quality:
The Sound Quality on the speakers is average. It is not very promising. Apple hardly concentrated on that!
However, Apple covers it with the Headphones. On that even half the volume is enough for good listening.
***
WiFi and Bluetooth both are nice. So far I have had no problems with any of them.
***
Gaming :
The graphics of the new version of MacBook are good. I mean core gamers can now play their COD 6 and others on the laptop, and its really fast too. But hey, most of it is not on the MAC OS!
So, Lets Sum up:
As you might know, the review was nothing but praise of Apple's Class product. The MacBook Pro 13" is classy, sleek and offers the right perks. Overall, i believe it is worth to spend $1199 but Rs. 70k in India is high! on this product. Gamers beware, its strictly for business.
9.2/10
----
P.S. Credit to Engadget for the Idea of Review Cards, Images by Apple Inc.
Posted by virtuoso Vidit at 10:46 PM 2 comments: 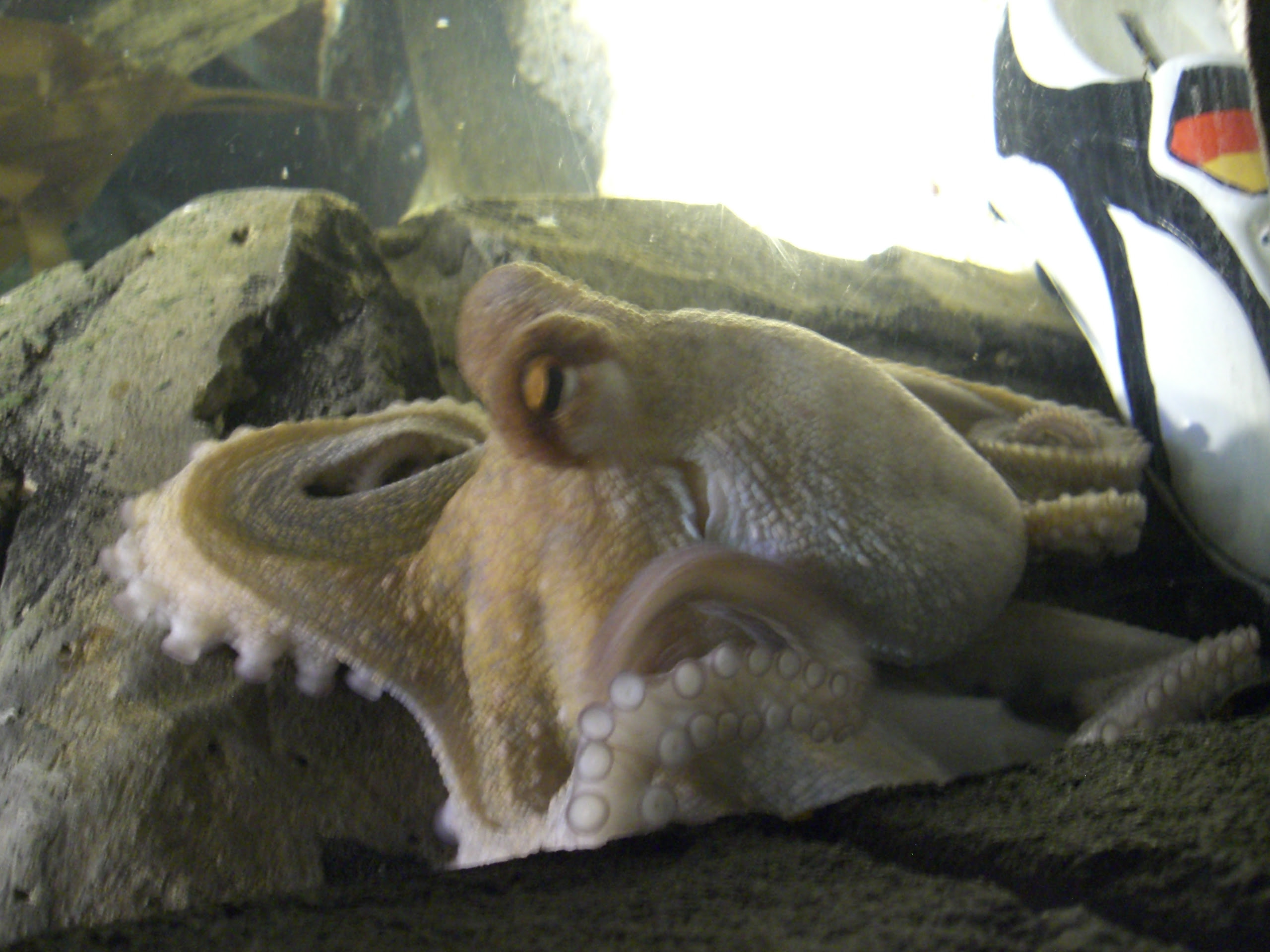 Vidit Bhargava
Paul? Who doesn't know about the little kid entertainer from Germany. I dunno what made his trainer, make Paul Predict the outcome of football matches, but I do know how he predicted them!
To start with let's know who this Octopus is : Paul is a common octopus living in a tank at a Sea Life Centre in Oberhausen, Germany, who is an animal oracle and now retired predictor of football matches, usually international matches in which Germany was playing.
I think that extract from Wikipedia should be enough! And I know you all know what an octopus is. As a matter of fact he is from the species of : Octopus Vulgaris (Ah, no I don't know much about it, except the fact that they are highly intelligent).
So lets come to the point. How did Paul predict the outcome of all German matches correctly? I shall tell them in the form of theories. Which our scientists have entitled as possibilities. (and none includes him being Physic or Physcokenitic).
Theory 1:
This is a matter of mere chance. Paul's predictions can be referred to those of flipping coins. Means, its just like flipping the coin and predicting the outcome, none of which involves much brains. So a normal octopus can do this perfectly well. 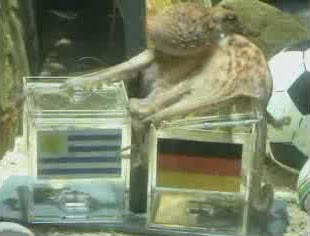 Theory 2:
This is the most convincing theory I've seen. This also involves chance (it is basic to any theory we have heard or will hear). The theory 2 is actually based on 'Potential Bias'. It is evident that Paul has been biased to Gemany in many matches. 'Except a few' but there is more.
Paul, is an Octopus Vulgaris, who are in all probability Color blind. However they do understand brightness and are queerly attracted towards Striped images (or stripped flags in this case.). We can see Germany has vivid Stripes in their flags. Compared to other countries, Australia, Ghana, England, Uruguay, and Argentina (which has stripes, however, as i mentioned before Germany is still more vibrant than him.).
With Serbia the stripes had a particularly Dark color and were natural more vivid to the Octopus. This made the Octopus choose Serbia over his favorite Germany.
And when Paul was said to predict whether Spain or Germany will win the Semi Finals, he got confused which explains the theory even more clearly. Paul, had been confused in the similarities of Flags, however he soon recognized that Spain with its more vibrant broad stripes was more vivid. So he chose Spain.
Vyacheslav Bisikov, a Russian biologist admits that octopuses can get attracted towards Striped Flags.
Other Theories:
Other theories also based on Potential Bias suggest that the Octopus, was trained to smell the water of the two boxes and chose one accordingly. 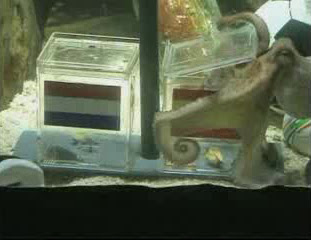 Another potential bias may be spatial preference or related factors such as light intensity. On six out of seven predictions for the World Cup (no information about Germany-Australia) the octopus chose the right-hand box (from the camera point of view), skipping only the box with the English flag. On four out of six predictions, the German flag was also on the right-hand box, the exceptions being matches with England and Spain. Thus choosing which flag would be placed on the right-hand box may have influenced the predictions.
So, all you guys thinking him being Physic are wrong here. Although this octopus had performed well this year in the FIFA World Cup. He did predict in the Euro Cup and lost two matches. This justifies are saying its Chance. And since all studying him have agreed on one point, he practices Potential Bias.
However, Since Paul has retired now and Paul predicted one match at a time. Its not possible for the scientists to make a thorough research on him.
But for now lets just Agree on the most confident theory of all : Theory 2: The theory of Stripped Flags. Who knows extra research could reveal surprising results of Physic evidence and make room for new fields of Wide Research or they could as simple as flipping a coin and predicting the outcome.
Posted by virtuoso Vidit at 10:38 PM 1 comment: