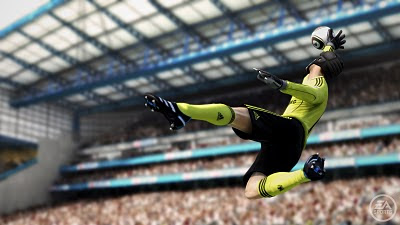 Vidit Bhargava
Bien!, what do I say? It has been a long and tiring two months for me. First the online Tech Quiz, then viral and then the CBSE CCE Exams (about which I'll write but later!), I got time and played the FIFA 11 - Demo. Here's what's my First Impression about it.
FIFA 11 will be coming at your nearby store this week, we got a copy of the FIFA 11 Demo, just a few days back and here's what we have to say about the game:
Graphics: That's the first thing you'll notice about the game. The game has the same graphics engine, that they are using for XBOX 360. It certainly does take FIFA PC to a new level, the previous two graphics engine (FIFA 07,08 and FIFA 09,10) look amateur in front of the new NEXTGen Graphics. What you'll notice here is that not only the graphics engine is of XBOX 360, the whole game works on XBOX 360 Gontroller commands, which you need to tweek for your Keyboard. Although for the Gamepads All is well. 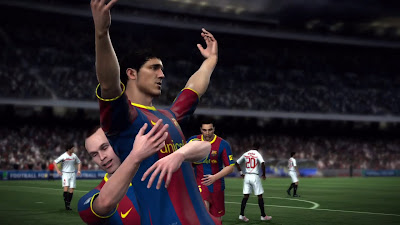 Gameplay: What FIFA has immemsely improved at is its gameplay. They keep on making changes to it every year, to make the game look realistic, but fail bitterly. This year's FIFA 11, does the trick. It is 'realistic' with all those players who keep on moving around the field and not stand like plastic puppets, and that is peppered with the brilliant graphics. Which makes it a visual aswell as core delight to play the game. Also, the AI gameplay has improved, It takes time to figure out how to battle it to a perfect goal finish add to that the thrilling matches which are only possible because of AI's ruff and tough play. 360 Dribbling is also a neat addition, it gives you the advantage of keeping the ball out of the AI's way!
Pro-Camera: One thing you'll find with FIFA 11, is its new pro-camera. What's new about? It gives you the players eye when playing the game. So what basically happens is, that it becomes easier to score a goal or defend it. Pro Camera also has this really cool feature of accelarating the camera speed when you make your player sprint which gives an even better experience.
Crowd and Commentary: Though this is not something very important but it has still got better than most of its previous versions.The crowd is now 3D and keeps on screaming and whistling. (The full version will have custom crowd chantings), commentators remain the same but their style of commentry has grown into something more world-class. All this, multiplies the thrilling experience of the game.
But is all well with the game? The answer is a decisive no. Although, the game may be brilliant in most of the areas but it still has some bugs. To begin with, there is a prevailant passing bug, now when you pass to a player, it happens that almost 70% of the times he'll miss the pass between his legs, also sometimes the players pass the ball, even when their not said to do so, another bug which was encountered by many was the alien player bug, Here, one of the players of the demo displays no-face instead shows a green-black color instead. There are still many big and small bugs in the game apart from these two. 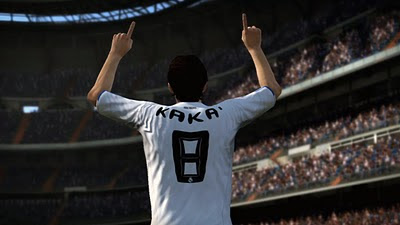 Apart from the bugs, the camera swing also has a problem. When using the Dynamic V2 Camera modes, you'll see that you cannot see the defenders image when defending a free kick or you may not even be able to see your goalkeaper taking a kick. When passing it happens almost all the times in the dynamic camera that your fellow player to whome you are passing isn't visible. The same is prevailant many a times in the 'new Pro Cam' mode. I also feel sometimes that referee is potentially biased!, he never gives a free-kick, penalty or red-card to the user's benefit, and even for the tiniest of tackles you'll be punished bitterly!
My first impressions of the game are very good. Even though the game has minor and major hiccups, but it is still one of the best FIFA Gaming Experience on your Personal Computer. I hope they fix the bugs before the game's official release.
And please this is not a review. I'll be reviewing the game, and posting it in a month's time. These are just first impressions
------
P.S - I couldn't post the actual game play screenshots, because of the brilliantly bugged windows 7 which doesn't allow for Game Screenshots. Oh and a Belated happy Birthday to my blog, which just got 4 years old on 30th August!
Posted by virtuoso Vidit at 11:11 AM No comments: