Vidit Bhargava
What has actually changed in my Personal Computer in the past 4 years, of its Existence. Detailed Table View:
Posted by virtuoso Vidit at 10:36 PM 114 comments:

Vidit Bhargava
This is the one big i have been waiting to announce:

Posted by virtuoso Vidit at 11:53 PM No comments:

In July 2007, I was struck by an idea. The idea was fairly simple. Creating a “Magazine” that would give information about all the latest Tech-Happenings, free of cost. The Digit magazine came with a price tag of Rs. 150, at a time where Information was available free to all through the internet. Why then, should we pay that much to seek Information from one place. Why not, just have a free-to-read e-zine(Electronic - Magazine), for all tech happenings. I wrote about Technology every-month, and posted the same on my blog. Later, This would not continue. MVDIT TECH BOOK, Needed a Website from where the visitors would download the PDF. Fairly Simple to task to make a website, but a mammoth task to have visitors. But that will be talked about later. Over the years, my e-zine has grown from a hobby, to a large project, and most recently I expanded it to the waters of tech-Blogging. Today, I am going to announce, an upgrade to my website and e-zine project.

Simplified HTML5 + CSS3.0 Code:
MVDIT TECH BOOK, has always believed in keeping up with Standards. Its no-use having a web-site that doesn’t run on Multiple Device Platforms. Most of them, today are Mobile Phones and iPads. Since, We Believe, IE6 is getting quite non-existent, and Firefox and Chrome and Safari have taken a place in the World of Tech-Savvy Audience (Our Readers), We have made our website fully equipped and running with HTML5 and enhanced CSS in its blood. The Code has also been “Simplified” reducing the hard-work of updating a website every-time an article is written, or a magazine is published, by more than 80%. A Central File in each directory, now Controls the navigations of the Website. So all of the work of updating a Navigation Panel in each page of the website after an article is written, has been cut-down to 1 in each directory. This also increases the efficiency of our Website.

A New Completely Revamped Design:
We also thought, that along with this major HTML update, we should pep-up the Website UI. We did this by adding a cool-new background to our website, and making the home-page more information friendly than before. Now you don’t need to Look Anywhere for the Latest from our Website. It is there, in front of your eyes, all the time. 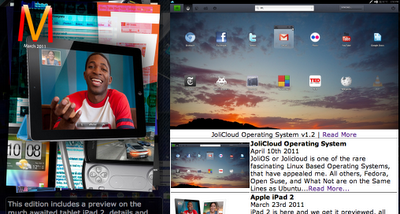 The News (Earlier known as Announcements), Reviews, and Games Section has also had a UI shift. We’ve Shifted to a completely new UI, that has never been seen before, on any website. The New UI Provides the User an Interactive Experience while reading the articles. It is as many say, Better Looked at, than talked about! 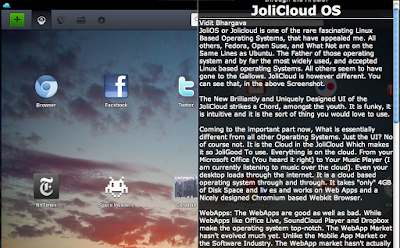 New Navigation Panel
A Simple Tweek, Suggested by Mudit. The Navigation panel is now slicker and much more proportional. We’ve changed the Announcements to News and Added a new Tab for Archives.

MVDIT ROBO CLUB:
A word about the Robo-Club, You will notice that the MVDIT ROBO-CLUB has gone from the navigation pane. The Robo-Club had been non-functional since the past few months. We had already announced an indefinite suspension of the MVDIT ROBO-CLUB from our e-zine. We haven’t Scrapped the Idea completely and we hope to bring it back with better more efficient ways to operate it.

More Efficient Disqus Comment System
The Disqus Comments System, the one which is used for the “News, Reviews and Games” Section has now been upgraded with Mobile Device Compatibility and Image based comments. Also, Now You can login through any email-account or even anonymously post a comment.

YouTube Channel
YouTube has been one of the most Dormant Section of this E-zine. We have done a little work to improve on it. Initially We Will Be Uploading and Displaying the Company Released Videos of the Latest Announcements, and in the near future we plan to upload our own videos and views on the Latest in Technology.

Wallaby Testing
Wallaby is one of the most interesting pieces of project ever introduced by Adobe AIR. While Adobe maintains its love for the Web-Based Flash Content, at the same time it is providing a choice to the developers to change their Flash Files to an HTML5 and CSS equipped HTML page. Although, in its early development stages, we got a chance to test Wallaby, and We are pleased to know that in the later, more stable editions of Adobe Wallaby, the page-curl “will” most certainly be convertible to HTML5 content and hence be allowed to be played on all platforms.

And One More Thing
We Will Soon Be Upgrading our Domain. More Information will be Provided in the Next Post.

An Evening With JoliCloud 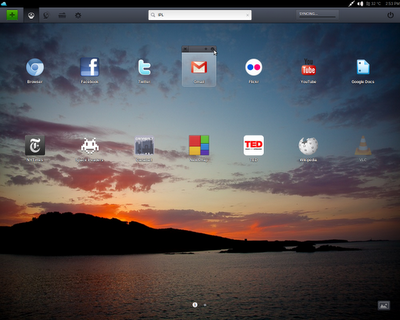 Vidit Bhargava
JoliOS or Jolicloud is one of the rare fascinating Linux Based Operating Systems, that have appealed me. All others, Fedora, Open Suse, and What Not are on the Same Lines as Ubuntu. The Father of those operating system and by far the most widely used, and accepted Linux based operating Systems. All others seem to have gone to the Gallows. JoliCloud is however different. You can see that, in the above Screenshot.

The New Brilliantly and Uniquely Designed UI of the JoliCloud strikes a Chord, amongst the youth. It is funky, it is intuitive and it is the sort of thing you would love to use.

Coming to the important part now, What is essentially different from all other Operating Systems. Just the UI? No of course not. It is the Cloud in the JoliCloud Which makes it so JoliGood To use. Everything is on the cloud. From your Microsoft Office (You heard it right) to Your Music Player (I am currently listening to music over the cloud). Even your desktop loads through the internet. It is a cloud based operating system through and through. It takes "only" 4GB of Disk Space and liv es and works on Web Apps and a Nicely designed Chromium based Webkit Browser. 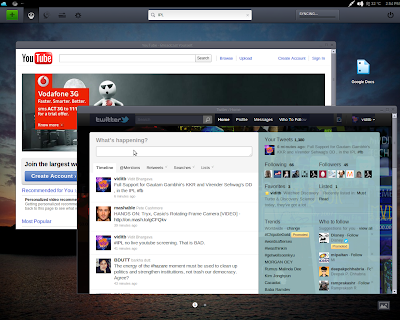 WebApps: The WebApps are good as well as bad. While WebApps like Office Live, SoundCloud Player and Dropbox make the operating system top-notch. The WebApp Market hasn't evolved much yet. Unlike the Mobile App Market or the Software Industry. The WebApp market hasn't actually had a launch-pad yet. It has potential, yes. In the age of 3G Internet and Broadband Access, The WebApp market 'can' make an impact. However it is growing, and yet to reach a stage where a main-frame operating system can lead. Having said that, JoliCloud has a few notable WebApps: 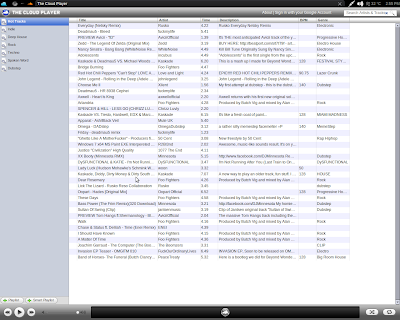 2. CloudPlayer by SoundCloud: This one is fun. I have always liked the idea of a web-based music player. And with a sort of library that soundcloud possesses is ideal for CloudMusic. CloudPlayer gets a thumbs up from me!

3. Mougg: It is the Same Music over Cloud idea as SoundCloud, but this time, you have a private cloud to share music. So, You can listen to only your favorite songs.

4. OfficeLive and Google Docs: These aren't actually web-apps, I won't call on them so. While Microsoft Provides the familiar Microsoft Office to all "Computer" Platforms, Google Docs lacks that popularity but extends help to everyone who needs it. So both Mobile devices and Computers are in-sync. Also Google is more simple and hence better if you ask me.

5. Simplenote: One of the most elegant web-apps of the JoliCloud Platform. Simple Note is just Simple. You get a two-column layout. One displaying your list of notes (Synced through web and covering all mobile devices) and the other displaying your current note. By Far my favorite. 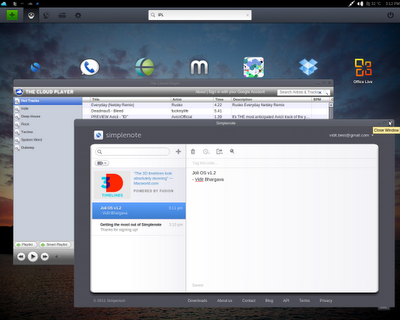 JoliCloud also comes pre-installed with a VLC Player which provides the best software for Watching Video. And then you have Youtube to look videos, which play without a problem.

These apps need no-reviewing. They are good, as I mentioned before. But They are less. And Indeed very less. Hence, building an Operating System on it works only to some extent.

The Lack of a Graphics Software, poses serious threat to the usability of the Operating System, all Linux based OS have a GIMP but this doesn't have it.

Games are a big problem, with this cloud-based OS. Unless, you aren't a big fan of web-games you will find, No reason to use this OS for Gaming. It is Horrible at it. Believe me!

Performance wise, there is not much problem, SoundCard Drivers are pre-installed, Multimedia controllers o fmy keyboard work well, There is a little problem with NVIDIA's Graphic Driver, and some sort of glitchy-wild-image with binary digits appears every time the computer goes to sleep, but overall it is at par. Also JoliCloud loads faster than ubuntu. There is also a lack in the number of fonts that come installed with the OS, not many. 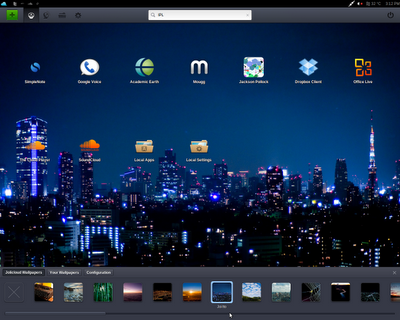 I would conclude here, by saying, You can chuck your windows operating system for JoliCloud if you are using a netbook or windows based tablet. But JoliCloud Has A Long Way to Go to Actually Pose a Threat to Windows, or other Linux Platforms. Oh well, on a brighter side it does provide a new option to use linux.
JoliCloud is not for Tech-Savvy it is for the Web-Savvy audience.

-- JoliCloud OS also comes as a Web-app for Chrome.
Posted by virtuoso Vidit at 7:56 PM No comments:

Vidit Bhargava
Key Ingredients
Lets begin with a bottle full of Sprite. Tasty Um!! but its just colorless carbonated water. You could throw that bottle in a trash-can and buy Pepsi, Coke or Fanta. But thats not my idea of fun. I like a personal touch to things. And I did a few experiments with that dull and boring Sprite.
1. Masala Sprite - My brother was demanding "something good" to drink. What could I do. I had just failed at getting Coke from a nearby vendor, and had reluctantly bought Sprite, instead. (that guy had nothing else). I got an interesting idea. Here's What I did
That is it. Masala Sprite, Interesting Spicy-drink that just tastes likes Fresh Lime Soda, and it is completely easy. Ready in less than a minute. And Pure Happiness!
*Caution : The Masala should not be added after Sprite is poured into the glass. It creates a lot of effervescence.
2. Juicy Splash
That's what I like to call it. Simple Drink. Just add a little Sprite To some suitably tasty Juice. What it takes from your side is this:
Extra Step of Buying a Juice over hear. But if you already have one at home, that shouldn't be a problem. What comes out is some extremely tasty stuff. Sufficing your thirst for some great fun. It's Splashy, It's Cool and It's Impressive. My Personal Favorite!
3. Ice-Cream Soda
Typical Ice-Cream Soda, but its just as Simple as other drinks listed above. Just do as follows. It takes just about two minutes to prepare but impresses your friends in the party for months. They'll gap at you and say, "Where did you get that from?" while you can grin and say Top Secret! :) . Here's what to do
Voila! Your Ice-Cream Soda is ready!
Three Delicious Things you could do with your Sprite and have a great Party. That's all for now. I am trying other combinations too. For now you can try one of those three, or serve all three.
Since, Sprite was made to compete with 7UP. These wonders will also happen if you use 7UP.
P.S. I forgot to click pictures of any of these drinks.
Posted by virtuoso Vidit at 2:06 PM 2 comments: