BLUNDERS - A Request to Hindustan Times

I can remember three major blunders that the Hindustan Times Made Most Recently. I'd Like to highlight them here: 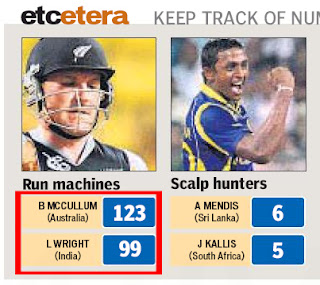 23rd September 2012: A Rather funny mistake. Looks like the writers were half asleep, or this section was handed to someone who hadn't watched cricket in his life.
Official Link: http://paper.hindustantimes.com/epaper/viewer.aspx -
Just Goto the Sports Page on 23rd September 2012.

10th July 2012: A rather small piece of mistaken journalism or misleading headlines. The Date is 10th July 2012. The Headline: Apple Releases Mac OS X Mountain Lion, which is misleading because the OS X Mountain Lion didn't come out before 25th July. However, the content explains it was a Gold Master release for Developers. Forgivable Yes. But, Nonetheless a Fast class example of Misleading Headlines. Targeted to Attract Visitors.
Official Link (Hindustan Times) : http://www.hindustantimes.com/technology/Application-Reviews/Apple-releases-Mac-OS-X-Mountain-Lion/SP-Article1-886376.aspx
Official Link from Apple: http://www.apple.com/pr/library/2012/07/25Mountain-Lion-Available-Today-From-the-Mac-App-Store.html 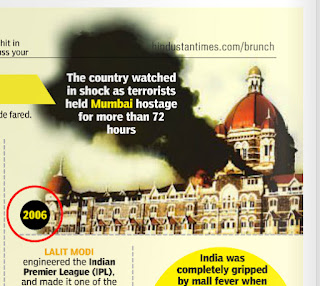 1st July 2012: This is rather a matter of national disgrace. HT Brunch the Magazine Hindustan Times gives out to its readers reports. The Year, of the 26/11 Mumbai attacks is mentioned to be 2006. What does one do with such journalists?
Official Link (the Official isuu account of HT Brunch) : http://issuu.com/brunch/docs/brunch-01-july-2012 - The news is on Page 8 of 24.
A Sincere Request to Hindustan Times. You guys are the most read Newspaper in India. You shape country's opinion. Such blunders just mislead/ misguide and perhaps anger the audience too.
This is a vidit Bhargava Production

P.S. Perhaps I've made a few grammatical errors in making this post. Forgive Me.
Posted by virtuoso Vidit at 11:24 PM No comments: