Vidit Bhargava
I've seen a lot of weird (and frankly stupid) questions on Quora off late. There seems to be a confusion of sorts on what to ask on Quora, given the broad terms in which Quora summarizes itself. Here's a small diagram that might help: 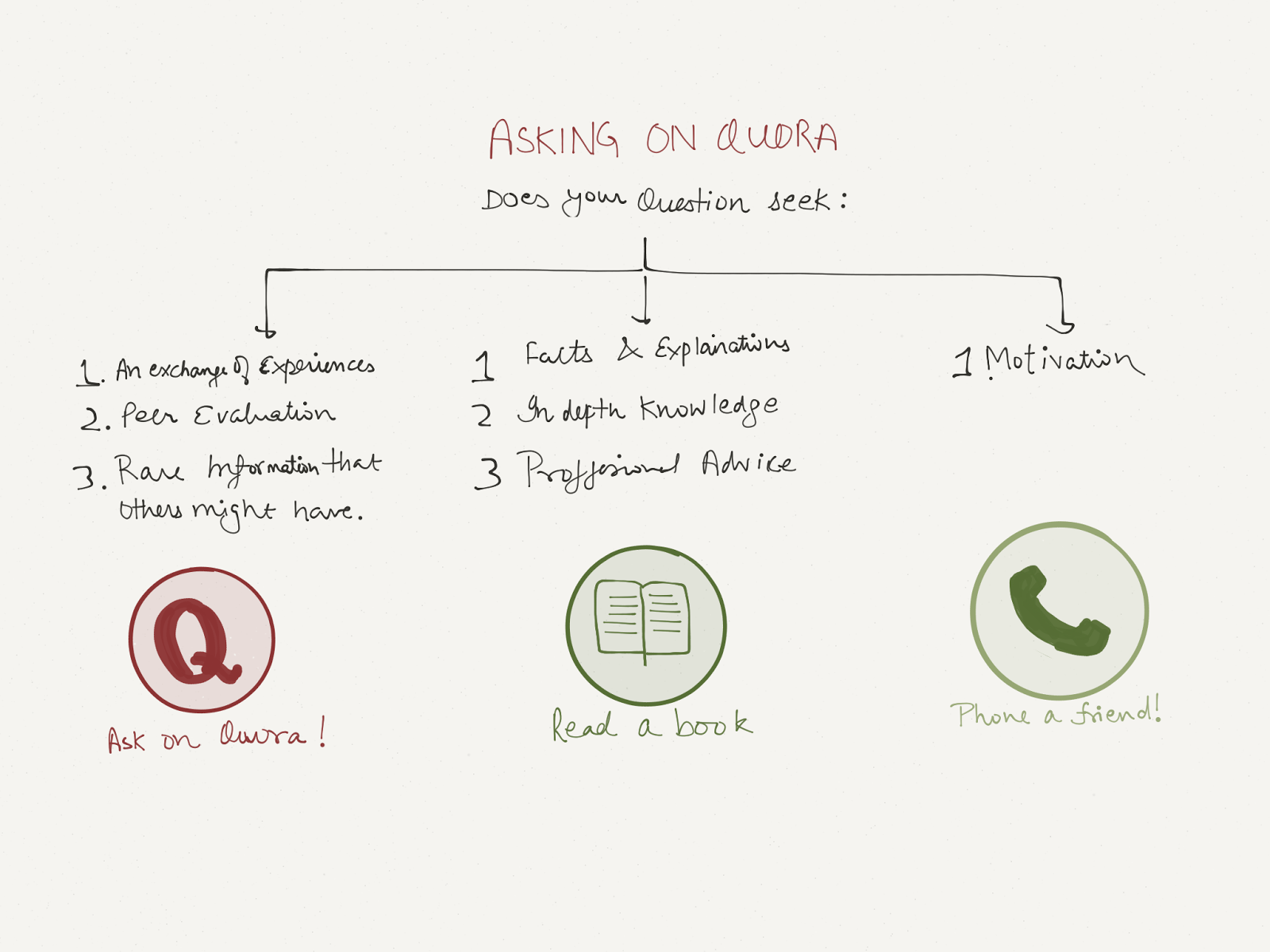 - This is by no means an exhaustive list. There's a lot more that'll yield great answers on Quora.

- Note: Along with Reading a book you can refer to Wikipedia as well. But don't forget to see the citations over there. Wikipedia articles while almost accurate, are easily manipulable and take some time get moderated.
Posted by virtuoso Vidit at 12:51 PM No comments:

Vidit Bhargava
Somewhere, roughly 30 minutes before the movie ends, you realise how poorly it is going to. You know the next 30 minutes are going to be a drag, yet you sit with hope that something saves Tanu Weds Manu Returns from a crash landing of a climax, a convincing sub plot, or maybe a twist in the tale? Alas, nothing such happens. Despite brilliant acting by Deepak Dobriyal and Kangana Ranaut, It’s hard to call Tanu Weds Manu Returns a great movie.

A sequel to the 2011 movie Tanu Weds Manu (Nothing great either), Tanu Weds Manu Returns follows roughly the same story line, given that the original leads are on the verge of a divorce. There are some good points that the movie tries to make, simple ones about forgiveness, but most of them are lost in the attempt at throwing out punch lines in every scene of the movie, some of them are even likeable, you chuckle a bit, a lot of them are cringe-worthy. It’s just hard to take any character seriously and hence, what they say lacks weight.

All is not bad with TWMR though, there’s Kangana Ranaut with what I think is the best double-role played by any actor, ever. The last I saw someone pull off multiple roles with ease was Paresh Rawal in Oye Lucky! Lucky Oye!. Ranaut’s double role extends beyond the look, or an accent. The difference in demeanour is noticeable. She goes through a complete transformation between the two. You could hardly say they are the same actors. In fact when I first saw the trailer of Tanu Weds Manu Returns, I looked back at the star-cast to check the name of the ‘debutant’ who plays the Haryanvi character in the movie. Only to realise, it was Kangana Ranaut playing a double role.

The support cast is commendable too. Deepak Dobriyal shines among the rest though. Never missing a comic-moment, Dobriyal’s acting is natural and is seldom over-board or hammy. Swara Bhaskar and Jimmy Shergill do a good job in their cameos too. Zeeshan Ayub does fairly well in a rather poorly written character, which is made to shout out lines, it’s a sham, I was expecting a lot better for Ayub, given how he single-handedly made Raanjhanaa as interesting as it was. Madhavan’s dependable as usual.

The biggest problem with Tanu Weds Manu Returns though, as I mentioned above, is the insistence on punch-lines and sounding cool, instead of substance (The prequel had none of it, and so it was forgettable, this one though had it all the time, but it was only side-stepped for more punch-lines). It’s a very indisciplined movie, if I may say. It spends a lot of time on what should have been on the side-lines, and as a result it ends up with an unconvincing climax.

That’s not to say TWMR doesn't have its moments. For a good part of the first and second half the movie is engaging. The soundtrack was unpredictably good, it fits in well with the movie, the songs hardly seem out of place are well composed.

But the ending is plain stupid. Rai builds up great characters. He sets the movie up for a serious 30-45 minutes of conflict. Only to squander it away, in what looks like a very very unconvincing ending. In the end you couldn’t care less who the characters went with, their decisions extremely baffling. The worst part is, it’s all predictable. How the movie ends is visible from miles away and so is the slump of a climax it is about to get into.

A lot of people liked Tanu Weds Manu Returns. It seems to have got a cult following already. You might like it too. But I didn’t (1). It was fun in parts but never turned out to be a memorable experience. If you must, watch it for Deepak Dobriyal and Kangana Ranaut’s acting prowess. You could even give it a miss, if you are finding it hard to get the tickets.

—
1 : I didn’t even like Queen. Couldn’t believe a character like that of Kangana Ranaut can exist, or simply couldn’t connect with the character, it seamed far from real. Some people tell me that such people ‘do’ exist and that her portrayal was pretty accurate. Characters like the ones she portrayed in Tanu Weds Manu Returns definitely do exist and she’s done great acting here too. But both Queen and Tanu Weds Manu Returns are over-rated in my opinion.
Posted by virtuoso Vidit at 3:14 PM No comments:

A Trip to the Sodabottleopenerwala Cafe 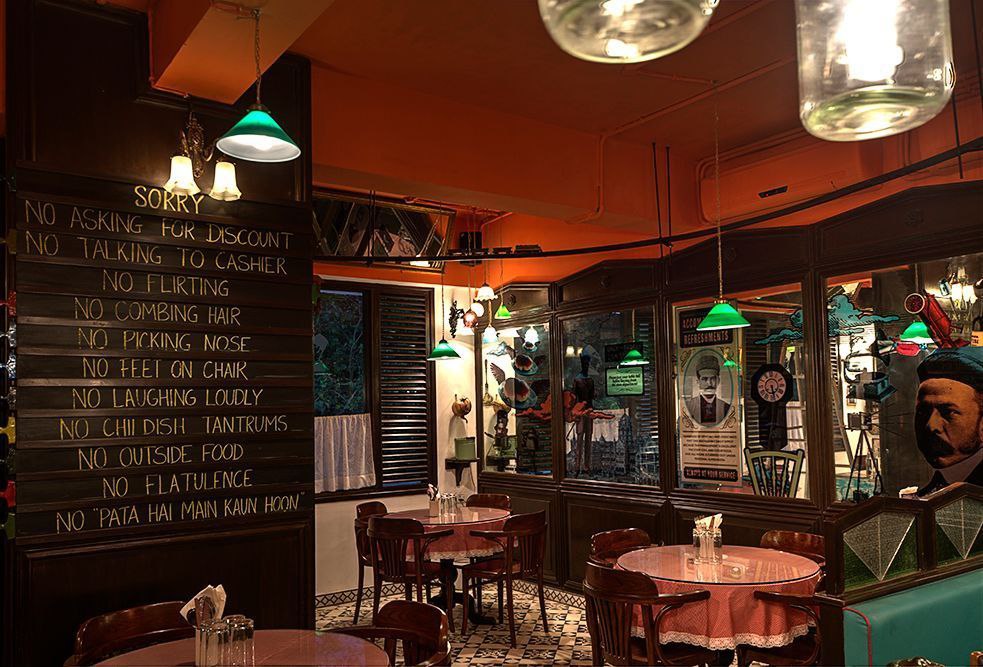 A few days back, I finally had the opportunity to visit the Sodabottleopenerwala (Yep, that’s somebody’s surname!) Cafe, in Delhi’s Khan Market, which I had previously missed for a much more unique menu of La Bodega, a fine dining Mexican Restaurant, but more on that in a later posted. Sodabottleopenerwala is the kind of crowded Iranian Cafe, that you’ve probably heard exists in places like Mumbai. It’s extremely noisy but the Cafe insists that it is what they intended to make.

Getting the Irani Cafe touch right, Sodabottleopenerwala is unabashedly skeuomorphic, it looks like a Parsi home that was made into a cafe. Proud to be Parsi, the cafe has a lot of references to them, like the stairway to the cafe, which is filled with the diminishing community’s family photographs, even the menu items contain some of the culture references to them. If you were looking for an Irani-Cafe experience in Delhi, I’d recommend this to you. It’s super good at emulating one.

But perhaps, in capturing the essence of an Irani Cafe, Sodabottleopenerwala also looses its productivity. It appears crowded, noisier than it should be (It’s probably the construction of the cafe which helps in resonating the noise) and slightly clumsy. This is not the cafe I want to go to have a peaceful afternoon of work. 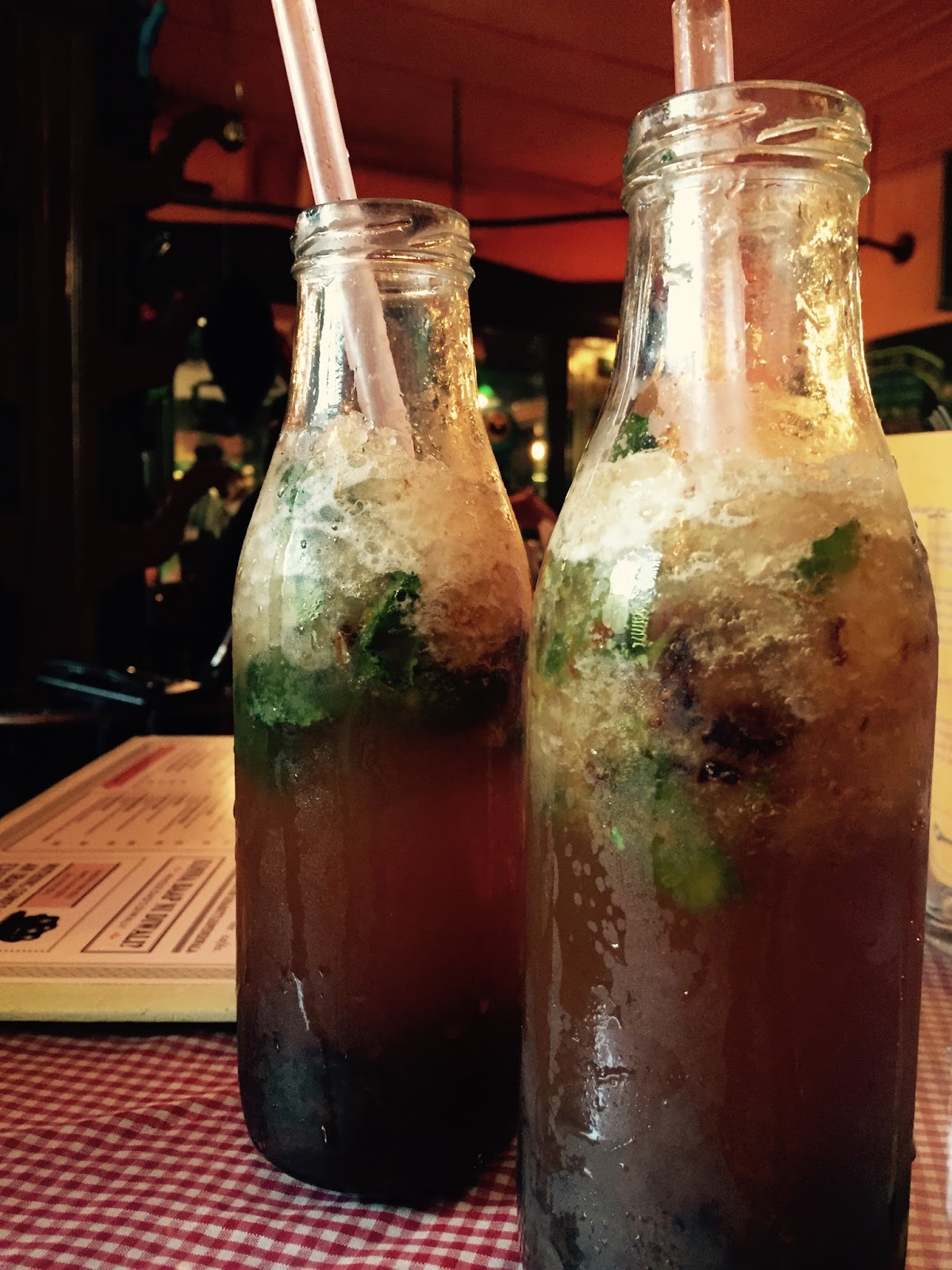 Sodabottleopenerwala probably has the most innovative menu I’ve seen in a long time. With food items termed as “Aloo Aunty’s Vegetable Cutlet” and “Jardaloo Ma Tarkari” it’s hard to not notice how much Sodabottleopenerwala Cafe loves it’s Parsis. (And, yes, there’s an Eggs Kejriwal too, if you are feeling too political).

So after some ‘intense’ reading of the menu, which involved me having to read the descriptions thoroughly as the names weren’t really indicative of the nature of the dish but rather the people who seemed to have liked it, I ordered the ‘Aloo Aunty’s Vegetable Cutlet’ , ‘Tardeo AC Market Mamaji’s Grilled Sandwich’ and a ‘Sikanje Bin’. The service was a little late, these three items took over half an hour to get served.

Food Items at the Sodabottleopenerwala Cafe have the subtlety of a sledgehammer. Everything, from the mint-beverage I had to the vegetable cutlet has a very unique and strong taste. Nothing tastes neutral, there’s an excess of some or the other ingredient, but that’s not to say, it tastes bad. It actually tastes pretty good. 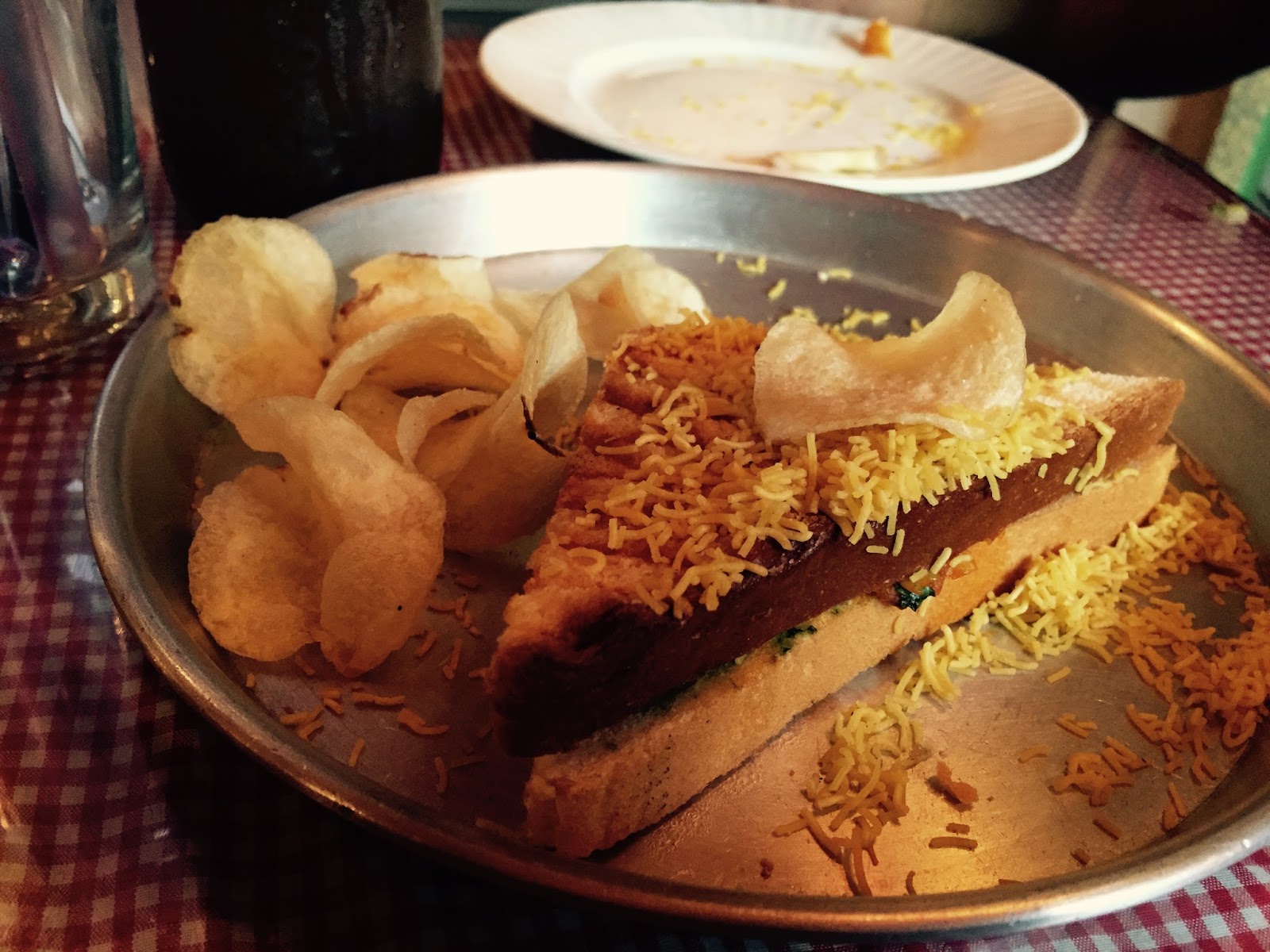 The Mint and Dried Plum drink I had was pretty refreshing, and tasted a bit like Spremuta. The Sikanje Bin is highly refreshing. Even the grilled sandwich was pretty well done too. Although, it had excess onion to it, it tasted very original and was completely different from all the other grilled sandwiches i’ve had. If I were to go back to Sodabottleopenerwala I’d probably order the Sikanje Bin and Grilled Sandwich. The Same however cannot be said for the Vegetable Cutlet, which just had too much garlic to taste good. The Vegetable Cutlet leaves a very very sharp taste in the mouth and is avoidable. 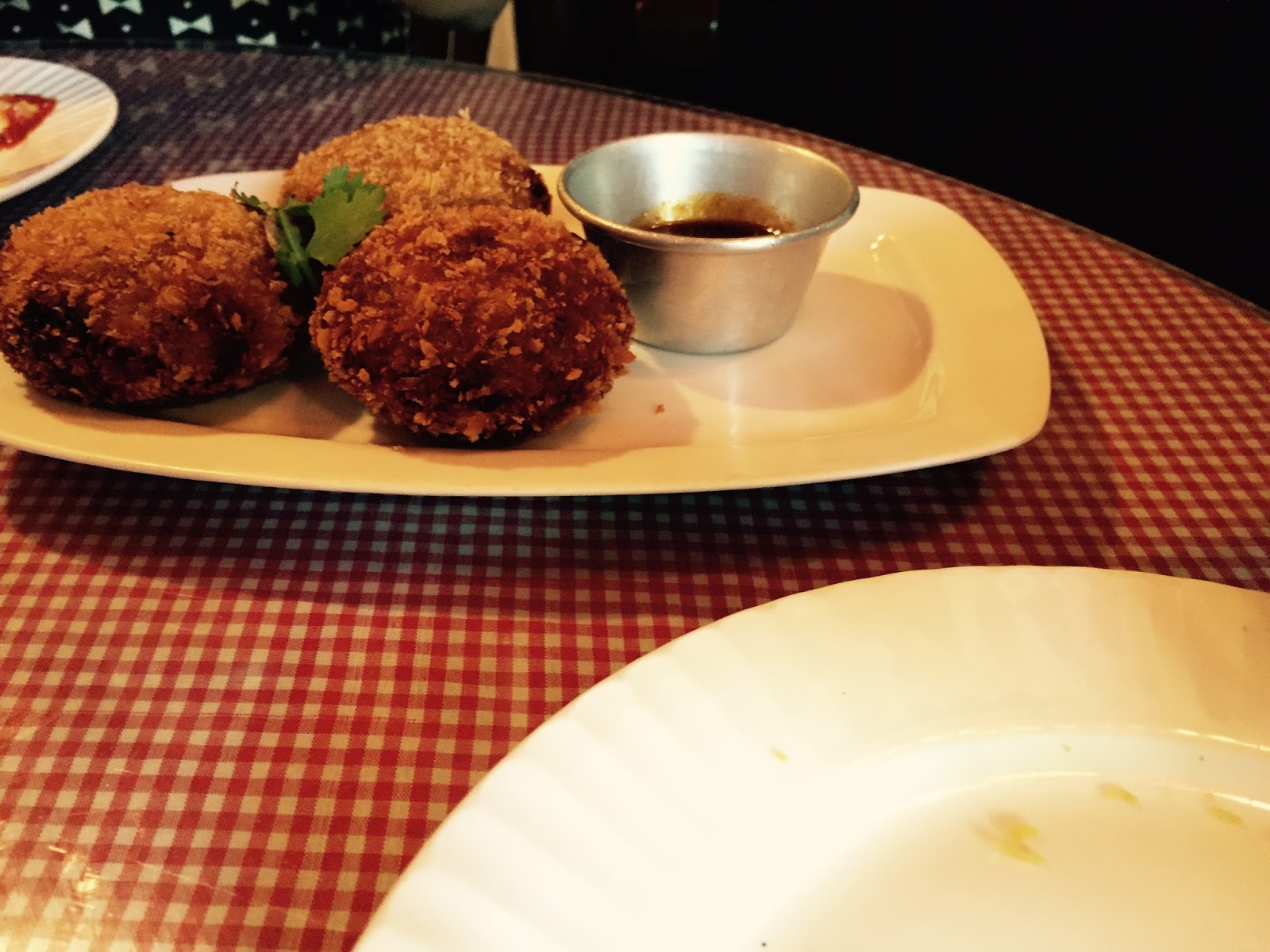 On the Whole, the Experience was a different one. Did I enjoy it? Yes, for the sheer delight of experiencing something completely new and different from the regular cafes. Will I go back to the Cafe? Probably Not. I enjoy less noisier places. 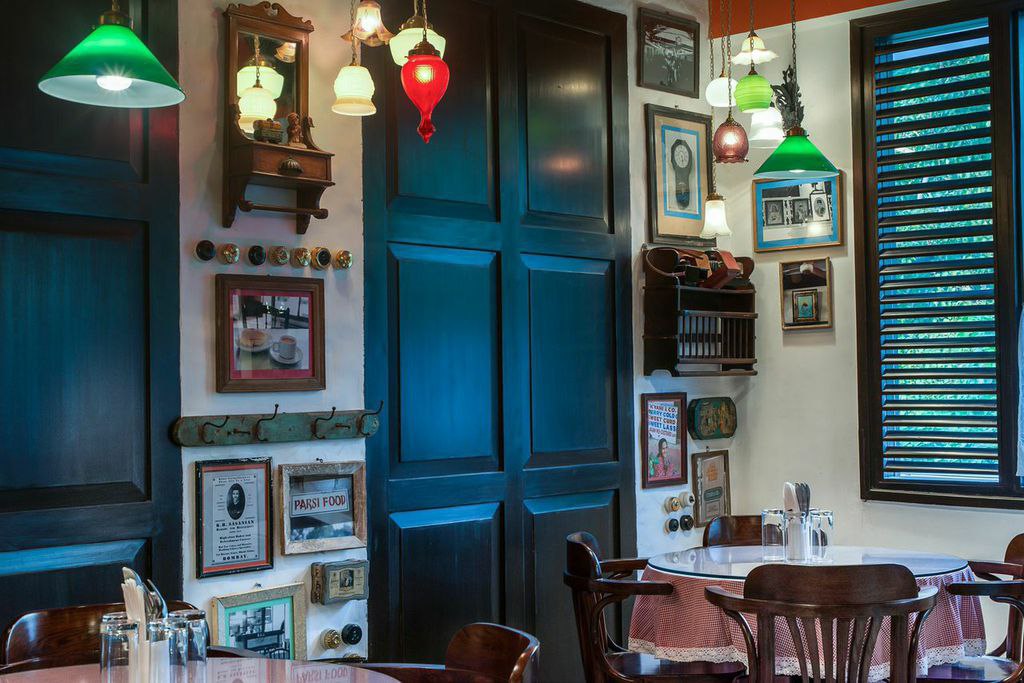 Posted by virtuoso Vidit at 10:14 PM No comments: