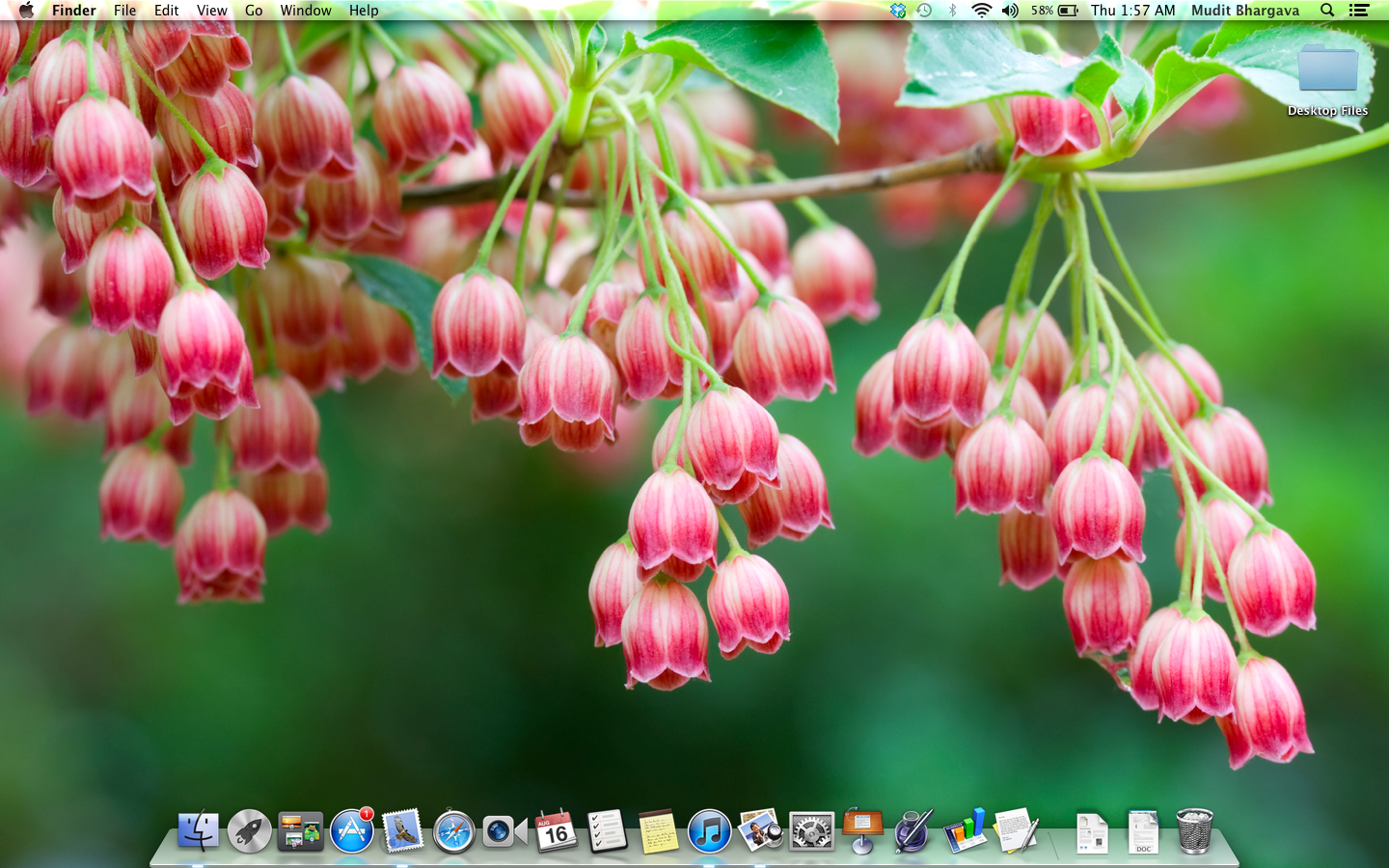 10 Minutes of using OSX Mountain Lion and you'll realize that it's the 200+ tiny invisible new features that are making your experience so lovable and not just the 10-12 new things that have been advertised.

OS X Mountain Lion is an extension of what Lion was. It's a sequel to the previous OS which introduced various iOS elements like the Launchpad, and new management tools like Mission Control. Mountain Lion betters that experience and adds a few more iOS elements in the decade old OS X which just gets better after every software update.

Among the little things that have been improved in OS X are the multitouch gestures and the overall scrolling experience. There's a simple intuitive gesture from almost every task you'd be performing. You can tap with three fingers to launch a quick preview of any file in the finder. A pinch inwards with your thumb launches the Launchpad and a pinch outwards cleans everything up and you get a clear view of your desktop. OS X maintains its love for gestures and they just get better by the day.


Launchpad is easily the quickest way to get to your applications in OS X but it can get tiresome sometimes, to navigate pages of applications only to find something essential. Come OS X Mountain Lion,  the problem is ingeniously solved. Perched at the top of application icons is a search bar which activates as soon as you start typing with Launchpad open. Doesn't look anything awesome, isn't it? But it does make app launching significantly faster and is one of the neatest improvements you'll see in an OS (These things just get ignored most of the time.). Launchpad is something we saw in OS X Lion too but it gets more meaningful with Mountain Lion.

iCloud Integration with iWork: At the time of its launch the iCloud was criticized for its Mac implementation. It was clearly obvious that iWork would get an iOS like document browser for iCloud documents and people were really disappointed when it didn't come at its launch in October 2011. Well, it has come now. And it's a blessing! You can save / open files from your iCloud Documents and access them on almost any iOS device you own (Will need iOS 5 or later) and all your mountain lion macs. It's clearly a win-win situation for those who own multiple Macs or iOS devices.

Gatekeeper: It's a tool that gives you the power to pulldown a shutter on any outside apps and converts your Mac into a closely guarded walled fortress. You can then download applications from the Mac App Store only or choose an option to download apps that have are signed with a genuine developer ID. This is quite a disappointment. The Mac App Store doesn't have a really good selection of apps to choose from and the sandboxing of applications is still taking a little time, even though most developers have done that. It's better to keep the gates open for now.

Apart from these little additions, almost everything has undergone changes which improve the user experience and provide more functionality in most cases. 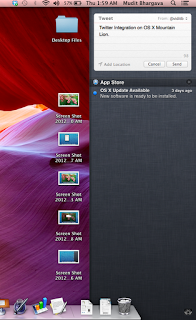 Apple's update to the new OS is more productive at many fronts. For Example, you get all your Mails, tweet replies, news updates, reminders and very soon, Facebook notifications on the notification center, as soon as you switch on your Mac. The great part is that all you need to do is a simple two finger swipe from the edge of your track pad to reveal the notification center. A Notification Center on any device is extremely helpful. At times I find my self 'switching on' the computer only to check for mail and news updates and i end up doing all kinds of un-productive work most of the times, but having a notification center really helps curbing that to a great extent. The only thing that bothers me here sometimes is the lack of weather and stocks widget in the Notification Center. Both the iPad and Mac lack them. But these widgets on the iPhone are extremely helpful and it's a disappointment not to have them on the OSX.

There are things Apple has done to build a stronger Eco-system between iPhones, iPads and Macs, With this update. Some of them are very powerful (iClouds Documents and Data) others like Reminders and messages are cool additions but I can hardly find any common uses of them when using a laptop, compared to using a phone. I'd rather have my self notified on a phone about my grocery shopping every time I'm near the grocery store than be reminded on the move on a Mac when in all probability I'll be doing some extremely urgent or important work (hence even using it on the go).  But it works just about fine the other way around, say I set up reminders to take certain things or drop a package to my friend, on a mac. I can then receive notifications on my iPhone and iPad whichever device I have. The restriction of course is that you need to be a part of the eco-system. And to do that you must have at least two iOS/ Mac devices. 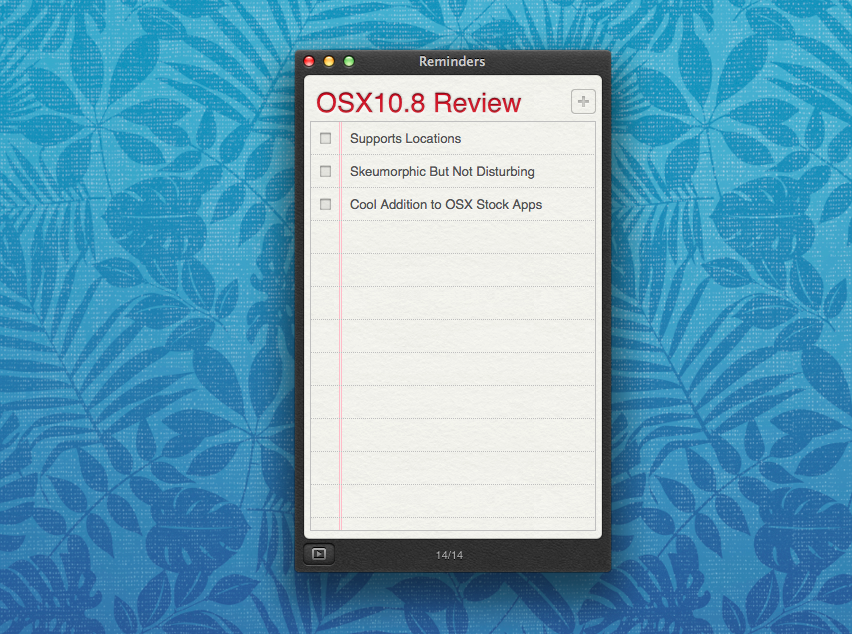 The other ecosystem loving app is the Messages application app that comes as a replacement to the old iChat. Messages maintains a good balance between your IM chats and the others that you do with your friends having iOS / Mac Devices. Its just ideal for Mac-Mac conversations. And  There are many more uses of such an app, including the fact that you are actually receiving chat notifications as soon as you are on your computer. Moreover messages could benefit in the future with a PC app to. That'll then create a definitely powerful and successful chat client for communications between computers (something like an SMS service for a computer). But that seems to be a far fetched dream for now. There is also the notes application which is quite snappy when referring or creating quick notes but handles image formatting quite badly. Notes also lacks options to attach audio or video to the notes and has a very premature image embedding option. In short Notes is behind a lot of competition when we look at how others like Evernote provide such features but in simplicity Notes for OSX beats all other apps including Evernote. There is no immediate revolutionary use of this app but it's not bad to have something like this. 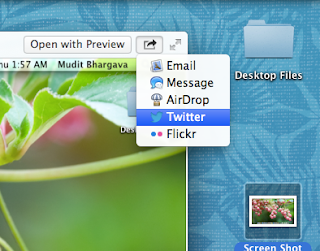 Sharing is big in OSX Mountain Lion. You can share links, photos and videos on the two biggest social networks Facebook and Twitter (and of-course Seina Weibo too) and you can also upload photos and video to Flickr and Vimeo. You can just about share anything from any where. A single swipe to the notification center brings up the share via tweet option (and will soon have share via Facebook too), everywhere else you'll either find a share button or will have a share option. Everyone's on a social network these days. And sharing options make it easier to be more active on them and a good implementation just makes the experience more snappier. 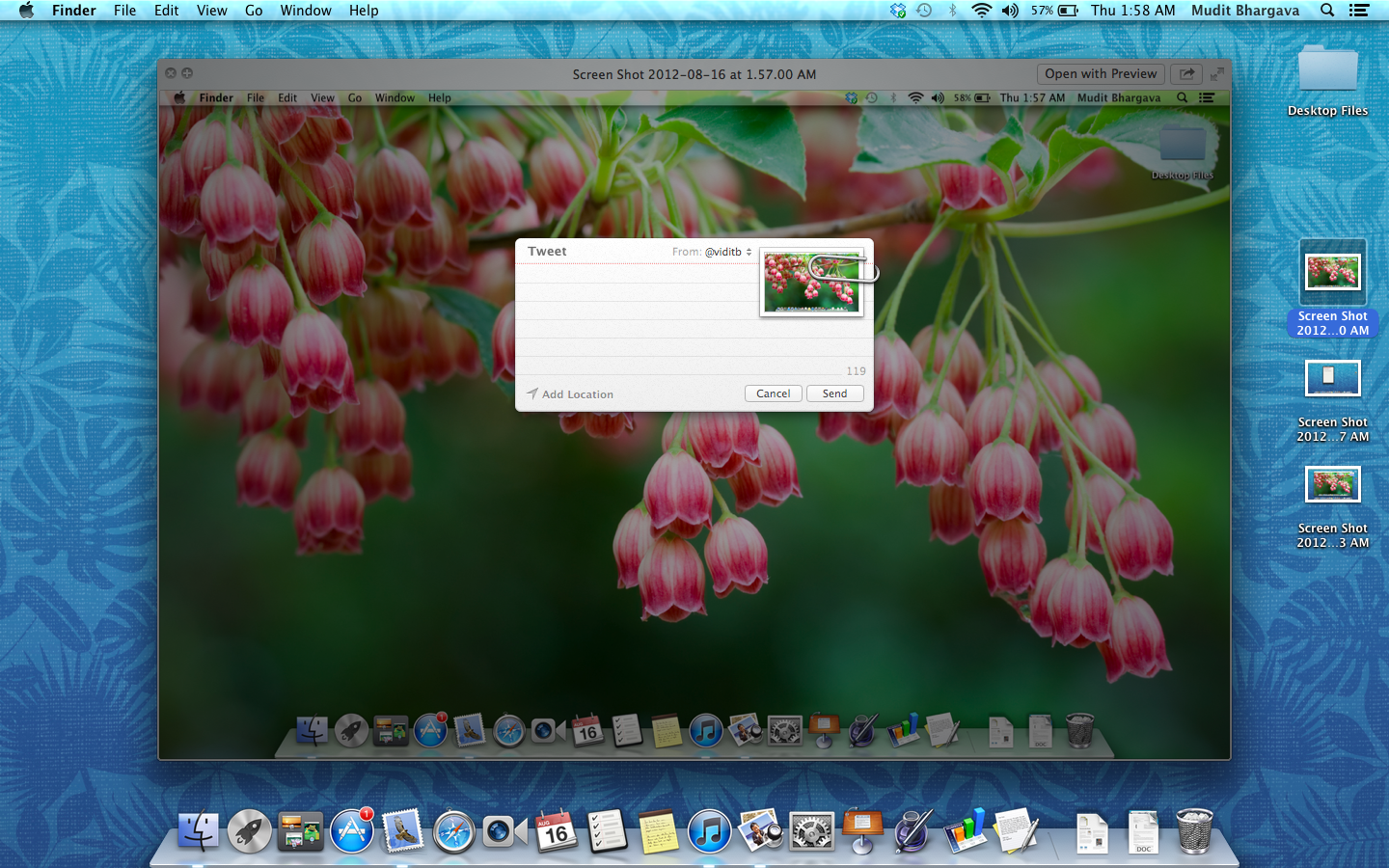 Safari's Offline Reading lists and the new tab view are little gems. The unified search and address bar was inevitable, but the reader icon that stays there at all times even when there isn't Anything to "read" is a bit irksome and feels a little out of place at sometimes. Safari feels quite fast on OSX and hence gains a lot more audience than chrome (running on a similar engine) ends up getting.

Dictation on OSX is quite average, it's hardly able to recognize the Indian accent without making mistakes. But Having said that dictation on OSX ranks among the best speech to text tools available in the market. Dictation actually gets better over the time, it learns how you pronounce certain words, it gathers the speech data to do this. In our tests speaking in an Indian accent, Dictation showed only 44% accuracy but when tested on American accent the accuracy was pretty good. We may just be a step away from Siri on Macs. And that, would be amazing.


After long attempts, The Dictation in OS X 10.8 finally recognized my brothers name, when i dictated mine :/
— Vidit Bhargava (@viditb) July 29, 2012


No matter how unproductive voice dictations may be but they r fun 2 play with! @viditb:My iPad is awesome! Dictation: My headache is awesome
— Mudit Bhargava (@muditb) July 30, 2012


And the last thing that makes this OSX experience filled with sublime awesomeness is the AirPlay compatibility, with AirPlay built-in you can now listen to audio on your AirPlay speakers from any source not just iTunes or QuickTime. This is a really going to be helpful for those who've got either an AirPlay enabled TV or speakers, it makes the experience of using Airplay much better.

The dock Is an area of concern On OSX Mountain Lion. They've now put a grayish, more opaque than translucent dock with tiny lights that indicate whether an app is running or not. Compare that to the dock in OSX Lion or Snow Leopard and you realize how bad it is, it's not the grey color thats so appalling but the tiny lights which leave you with a sour feeling.

The Battery Life on the MacBook Air that I tested was quite appreciable and was quite unaffected by the upgrade. It runs a respectable 6.5 hours during heavy app Development hours and crosses the 7 hour quote sometimes, when you're just doing casual browsing or chatting on Messages. My tests on the software end seem satisfactory their doesn't seem to be any drastic change in the battery life ever since the MacBook Air was upgraded to mountain lion.

Summarizing the OSX experience, Apple's OSX Mountain Lion is a "massive upgrade" and perhaps the first truly social operating system. Having said that we're still in the OS 'X' era, and Mountain Lion maintains all traits of a typical OS X update and not something completely new. OSX is lovable to use and there aren't many glitches. It's perhaps the best update to OS X ever since Leopard. It's super cheap at just $19.99 and it'll be unwise not to upgrade your OS. 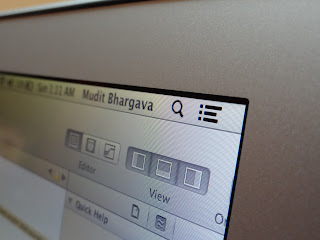