OK without talking much I will start with the Awards for the best mobiles this year.
-Basic Phones
Motorola leads here:
1.Motorola i335
2.MOtorola V195s
-Mid-Range Phones
Sony Takes the lead, which is closely followed by HTC:
1.Sony Ericsson Naite
2.HTC Star Touch
-Camera Phones
These are the camera cum phones which are, like 5MP Cameras, even 12MP cameras. Sony Ericson All the way.
1.Sony Ericsson Aino
2.Sony Ericsson Satio
-Smart Phones
The Apple iPhone wins it again. No beating to the smart phone, with every app in the pocket. While Blackberry still remains closest to the iPhone.
1.Apple iPhone 3G S
2.Blackberry Storm
-Touchscreen Phones
The HTC Phones this year wrecked the touchscreen competitors' ship.
1.HTC Hero
2.HTC Diamond 2
Posted by virtuoso Vidit at 8:55 PM No comments:

Top 5 Gadgets of the year

1.Sony Rolly
The Rolly from Sony is all about fun. It is essentially a robotic MP3 playing robot that dances to the music you play. It comes with Rolly Choreographer software to create your own motions and even share them online with others. But if you don’t want to create your own it comes with an Auto and Self Motion modes which will analyse the music and create the type of style dance you request.
2.Transparent Toaster
This transparent toaster allows you to see your bread while it is toasting so you can make sure you never burn toast again. This idea is based on a transparent heating glass technology. Although the glass unfortunately does not currently get hot enough to toast bread, the vendor explained with some research and development this appliance will be hitting the shelves by 2009. The concept was developed by the Inventables Concept Studio.
3.40" OlED TV
Currently your best bet for an OLED is the Sony XEL-1 which I also included in my top Christmas gadgets list. It’s not the best price screen per inch but certainly is the best looking on the market. But as with all good technology the price will start to come down and screen sizes will go up. Samsung have already prototyped early this year a 40″ Full HD OLED display with 1920 x 1080 resolution, 1,000,000:1 contrast ratio and is under 1cm thick.
4.USB 3.0
All you speed freaks out there look out for USB 3.0 coming soon. Apparently the connector, although looking very different, are back compatible - which is great news. The speeds we are looking at for this bad boy is 4.8 Gbit/s (600MB/s) which will make it the fastest consumer connector (Firewire S800T is a long way off). How does this compare to USB 2.0 that you will no doubt be using now? Well USB 2.0 can manage a rate of just 480 Mbit/s (60MB/s) - that is a 10 fold increase to USB 3.0.
5.Magic Mouse
Though not that impressive, as we expected to be from Apple but the Magic Mouse is still the beginning of the era of Multi-Touch Mouse. The Magic Mouse is the very Mouse, I have wanted to have.
Posted by virtuoso Vidit at 8:53 PM No comments:

Rating ****
Vidit Bhargava
This probably the dullest movie interms of sets that I have seen. 90% of the movie is shot in an office. At first glance the movie looks boring, it isn't. After Chak De India, the duo of Shimit Amin and Jaideep Sahni are back and with a completely different and unpredictable script.
The story is about Harpreet Singh(Ranbir Kapoor) who has almost flunked in his college finals but unlike Wake Up Sid! for the first time he knows what to do. He applies for a salesman job at a computer sales firm n' gets it. Nothing new, he is honest and is not able to tolerate the bribing that goes on in the 'sales world'. For that he is punished and humiliated, he begins his own firm in the firm, which is ofcource a secret known by too many people, he becomes successful doing that and ofcource he is not taking bribes, the rest is to be seen in theatres.... . Honestly the movie hasn't ended yet on his being successful.
The Script is gripping, the movie builds interest as it progresses, even if it gets boring when all that business talk starts, the movie still is my favorite this year!
Ranbir Kapoor is unrecognisable as a 'sardar', you only know him when he speaks and every sidekick also does acting very well. Nobody here is bad in acting!
Music of the movie is blended with the movie, there are 3 in the album and even less in the movie. "Pocket Mein Rocket" was conveniently removed but the rest of the songs are good.
The movie is full of one liners and gr8 dialogues like; "Risk toh Superman ko bhi uthana padta hai main to phir bhi Salesman hoon" and "Number kum hain par dimaag nahi!" exceptionally carried out by Ranbir and starcast. 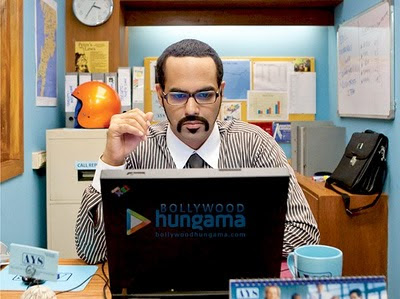 In a nut shell, The movie teaches you to be honest and how honesty still works. It makes you clap. The movie is no moral science lecture and the boring background doesn't cause the exceptionally gripping and interesting story any hurdle.
8 reasons to rate it 4 Stars

Posted by virtuoso Vidit at 5:01 PM No comments: