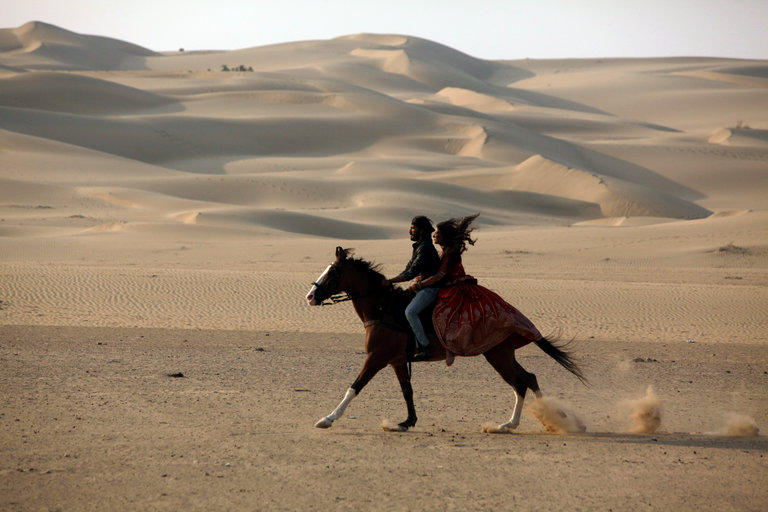 In the last few years, while there's been an outburst of innovative and somewhat dystopian stories. There's been surprisingly little innovation that's gone into the design of a movie's narrative. Not a lot of directors have dabbled into the non-linear narratives. Mirzya aims to provide some innovations in the storytelling space.

The movie's actually built over three parallel settings; All showing the same story. The first one is the traditional Mirza Sahiban tale, the second, a contemporary take on the same story, set in modern day Rajasthan And then there's this third tale, which moves in and out of the story, and which is more abstract than the first two. It's the story of how Gypsies narrate the Mirzya Sahiban tale (which I believe is the origin of the propagation of this legend) through song and dance. It is the most interestingly shot of the lot too, the gypsie setting blends in so smoothly for most of the part that you hardly notice that there's a story in there too and yet, it strikes you as the stories conclude, that there must be a conclusion to that tale as well (There isn't. The gypsies just keep narrating the story.)

There's another unique part to Mirzya. It has very little dialogue in it. So, basically what you are seeing is a movie adhering, not to a dialogue based script, but a visual representation of poetry. Dialogues are confined to the tale involving contemporary characters. The songs serve as the connection to the tale of gypsies and the contemporary characters And Gulzariyan connect the traditional tale to the characters. Together Gulzar and Rakesh Omprakash Mehra try to create a truly unique movie watching experience. As a literary work, Mirzya is as unique as it gets. Relying so heavily on the music, Mirzya also benefits from the fact that this is possibly one of the best works of Shankar Ehsaan Loy. So, the songs are usually a pleasant distraction from the narrative.

On paper Mirzya should really be the path-breaking, genre defining movie that it aims to be. But it isn't even close. The execution isn't great. The result is just a string of events. Moving from point A to B, and since this is a story that's been told so often, it's also predictable. It's hard to enjoy a movie that is both predictable and one whose characters fail to make any connect with the viewer.

Mirzya is one of the rare movies which I feel are too short. It tries to be too snappy, too quick paced, in a story which needed subtlety and time to seep in. But the filmmakers are interested in anything but building up the chief characters or giving them the depth, which was needed to drive the second hour of the movie. They are more interested in the grandeur of the legend and its timelessness. With no depth, it's just hard to care for the characters. The result is a visually stunning but ultimately hollow movie. Had the movie been a little longer, perhaps giving more screen time to the leading characters, we'd probably something better. What good is a tragedy where you can't root for its characters (This is a recurring theme in almost all the recent Hindi tragedies (Ram-Leela, Bajirao Mastani, Ranjhanaa, to name a few) I've seen in recent times. baring Ranjhanaa, by the end of every other movie, one couldn't careless if the leading characters lived or died in the climax.)

Mirzya also bets big on new comers and it pays of to an extent, Harshwardhan Kapoor, Anuj Choudhary and Seiyami Kher are impressive but don't get much to do with their depthless characters.

Pawel Dyllus' Cinematography is top notch. It provides the movie with a stunning landscape. The colours are vibrant, some of the shots could just be used for wallpapers. It'd be a shame to not watch Mirzya in a theatre Or on a wide color gamut display. There are so many subtle colour variations which I fear would get lost on a computer display that doesn't support P3. In terms of technical expertise, 2016 is really the year for Colour Correctness. Right from Kapoor and Sons, to last month's Baar Baar Dekho and now Mirzya, these movies are really picking up the right colours to produce a visually delightful experience.

In an interview sometime back, Rakesh Omprakash Mehra talked about the inspiration behind the movie. He mentioned how he was intrigued by the question of why Sahiban breaks Mirzya's Arrows And that he wanted to seek an answer to that And ultimately decided on making something that'd be open to the viewer's interpretation. Mehra largely succeeds in doing that. Towards the end of the movie, you do get a sense of why she broke the arrows. It's one of the few things that the screenplay successfully executed.

Mirzya is like the v1.0 of a concept. It's an ambitious project. One that aims at providing a new form of poetic storytelling and a unique non-linear narrative But it's also one that's too much in awe of the concept. So much so that it misses on many of the other important aspects. It's a miss fire but one that'll ultimately benefit the musicals to come. At least someone tried to tinker with Storytelling and Narration, when all that we are getting these days is either commercial crap or hyper-realistic, ugly and dystopian message movies. It's also a watcheable movie. If nothing else works, you still get to see some great cinematography and experience awesome music.

__ Gulzariyan is a phrase that was used to credit the short poetic verses in the soundtrack which appear to be fragments of a song but are actually part of the narration.

Posted by virtuoso Vidit at 12:50 AM No comments: